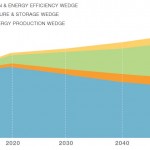 Globally credible GHG policy would help, not hurt, the oilsands

While there are many environmental concerns with the oil sands, the issue of greenhouse gas emissions (GHG) has the most potential to prevent Albertans from realizing the true value of the resource. The term dirty oil has clearly resonated with environmental groups both in the US and in Europe and will continue to be used […]