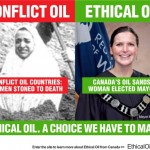 I just tuned-in to a fascinating Twitter conversation between Fort McMurray Mayor Melissa Blake and Alheli Picazo.  Ms. Picazo’s question was as follows; I was wondering if you had given your permission for your likeness (to be) used for the “ethical oil” PR campaign. Especially since your image appears next to a woman about to […]

Late this evening, an email arrived in my inbox that looked rather believable. The text of the email stated that: EthicalOil.org has expanded efforts to identify the Canadian oil industry as the world’s most ethical by calling on the federal government to ban companies active in conflict oil regions from operating in Canada. I jumped […]