Browse: Home / Uncategorized / The Mill Creek and the Valley Line – An opportunity we shouldn’t pass up

Up until 1970, the Mill Creek flowed through the ravine as we know it today, under what is now Connors Road, between 98th Avenue and the current site of the Muttart Conservatory, and finally under 98th Avenue to empty into the North Saskatchewan River.  You can still see the delta today – just walk east of the Cloverdale footbridge, and the first wooden bridge you cross, shown below, crosses the abandoned creek bed.

Edmonton faces a choice with the design and construction of the Valley Line LRT project – either the project can be designed to include or accommodate a future re-animation of the legacy creek bed and delta – which is a provincial priority according to the Environmental Assessment of the Valley Line – or it can render even more permanent the decisions made in the 1960s and 1970s that transportation infrastructure trumps our natural environment. 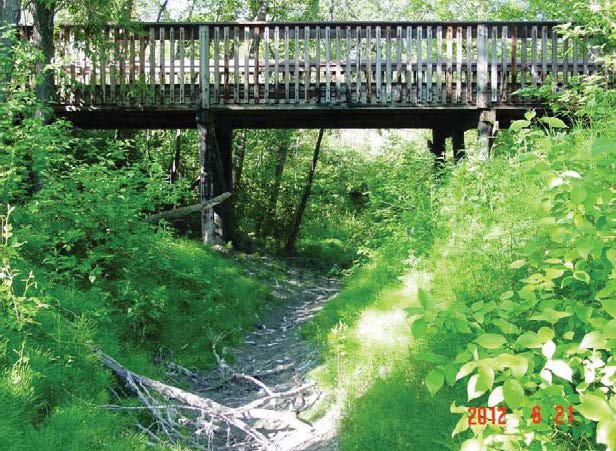 The City has completed both their initial environmental assessment for the project, tabled in July of 2013, as well as an updated assessment, released in February, 2015.

In the initial environmental assessment, it is stated that, “The City of Edmonton and Alberta Environment and Sustainable Resource Development (AESRD) have committed to evaluating the potential to reestablish connectivity of the Mill Creek system, including the reach located within the study area. Based on this strong desire to retain the channel in its current condition, and the long-term restoration efforts required if disturbed, disturbance and backfilling of parts of the channel is rated as an adverse, minor, long-term and predictable impact. It is minor not because of its importance but because of the small reaches included in the project area.”  While it is true that preserving the existing delta and remaining abandoned channel is important to eventual re-animation, it’s also important to consider what additional infrastructure is being placed in the creek’s historic path – in this case, a rail line, a 300 ft rail siding, and the Muttart Conservatory station – and how that infrastructure could accommodate a re-established creek. That the station for the Muttart Conservatory would be placed on or adjacent to a lost creek bed is, perhaps, an unwelcome irony.  Having the station adjacent to, and/or designed to accommodate a re-established creek would be more fitting.

In the most recent assessment, the City has stated that they have redefined project boundaries to minimize impacts on the abandoned Mill Creek channel, but they haven’t addressed the more important point – what about the impact of the project on potential efforts to re-animate the channel in the future?

On the two maps above, you’ll see that the project boundaries, from the south bank of the North Saskatchewan River through to the Connors Road footbridge encompass the entire legacy creek bed, with the exception of small areas on the north side of 98th avenue. Building the Valley Line in this exact right-of way would, potentially, preclude the reestablishment of connectivity of the Mill Creek, or render it prohibitively expensive.  That said, the Valley Line LRT   construction project, done right, could provide the best opportunity to re-establish the Mill Creek that we’ve seen since it was diverted in 1970.

The City has established that P3 contractors for the Valley Line must provide means for wildlife to cross Connors Road and the tracks by means of an underpass, providing access for smaller animals (skunks, coyotes, rabbits, etc.) to Gallagher Park and the Edmonton Ski Club grounds. Further modification to the plans, involving a daylighted creek channel and wildlife access along with the creek flow under 98th ave as part of the project would allow the project to have a positive impact on the natural environment, enhance regional biodiversity, and allow for the re-establishment of an important historical attribute of the City of Edmonton.  Given the height of both Connors Road and 98th Avenue relative to a re-established creek bed, it is unlikely that major roadwork would be required to complete this project.

Re-established creeks are amazingly resilient – in Burnaby, BC, the long-diverted Still Creek was re-established and today, salmon spawn in the creek.  A properly-designed Valley Line could bring thriving fish populations back to the Mill Creek and re-establish an important link in the North Saskatchewan river ecosystem.

Want to get involved? Contact Andrew Leach at leach.andrew@gmail.com.

PDF Version of this flyer: Bring Back the Mill Creek7

PDF of a Presentation to the Transportation Committee of Edmonton City Council for March 25, 2015.