My fellow economist Jack Mintz has a piece out this morning in the Financial Post on Alberta Separatism.  By Jack’s standards, this piece leaves a lot to be desired – it makes a claim that an Alberta exit from Canada would be easier (implied) and more beneficial (explicit) to Alberta than Brexit has been for England.  Now, to be fair to Jack, given that we are mere months from an official Brexit and no one seems to have any idea how it’s going to work, it would be hard to come up with a major change in policy which would be less beneficial to the region involved than Brexit is likely to be for Britain, but let’s put that aside.  The piece struck me as being glaring in its many omissions. What of currencies? Trade deals? Border security? International relations? Family connections? Perhaps amid all of these, you’ll think that the omission which struck me the most is relatively minor, but I don’t believe it is.

There is no shortage of projections from leading energy analysis shops which depict a constantly growing global oil demand.  The International Energy Agency (IEA), in their recently-released World Energy Outlook , has a base case scenario with oil demand growing by 1% per year – from 95 million barrels per day today to 120 million barrels per day by 2040.  The US EIA has a similar projection in the International Energy Outlook, with oil demand increasing to 122 million barrels per day by 2050. BP? Their base case has oil consumption up over 15% from 2016 levels by 2040. Exxon Mobil sees 19% growth from current levels by the same time period.  These projections, however, also share a common consequence – climate change.  In the IEA’s case, their Current Policies Scenario has emissions climbing from current levels of 32 Gt/yr to 42 Gt/yr by 2040. The EIA? 42 Gt/yr by 2050.  BP? 37 Gt/yr by 2040 Exxon? Global emissions peak by 2040 at similar levels (about 10 percent above current levels).  In all of the projections by these credible energy agencies and firms, you don’t get growing oil demand without growing emissions, and growing emissions means blowing through all of our global climate change targets.

The reverse is also true – many of these agencies and firms have looked at what happens if the world acts on climate change.  The International Energy Agency calculates what they call their Sustainable Development Scenario in which emissions begin to decline globally, and drop to roughly half of today’s levels by 2040. In this scenario, oil demand drops to 70 million barrels per day by 2040, about 30% below current levels.  BP? They calculate four alternative scenarios with emissions peaking earlier in each case.  Guess what? In their Even Faster Transition Scenario, where emissions peak between 2020 and 2025, oil demand in 2040 is almost 30% lower than predicted in their base case. Even Exxon, despite going to great pains to avoid admitting it, can’t really escape this reality.  They cite modelling results which show oil demand under 2C climate change mitigation scenarios for 2040 which are all well below their base case values for the same year. They, of course, focus on the variability in these results rather than the levels, although they do acknowledge that, “much faster improvements in energy intensity and/or CO2 emissions intensity are required to achieve a 2oC pathway.”

Last week, in preparing a talk for a Calgary School of Public Policy conference, I confronted these same questions.  I downloaded all the model results I could find from a new repository of runs used to build the IPCC Special Report on 1.5oC (the same models Exxon-Mobil cites in their study, before you get too excited about bias).  Here’s what I found – the models predict significantly lower oil demand when significant action is taken on climate change. 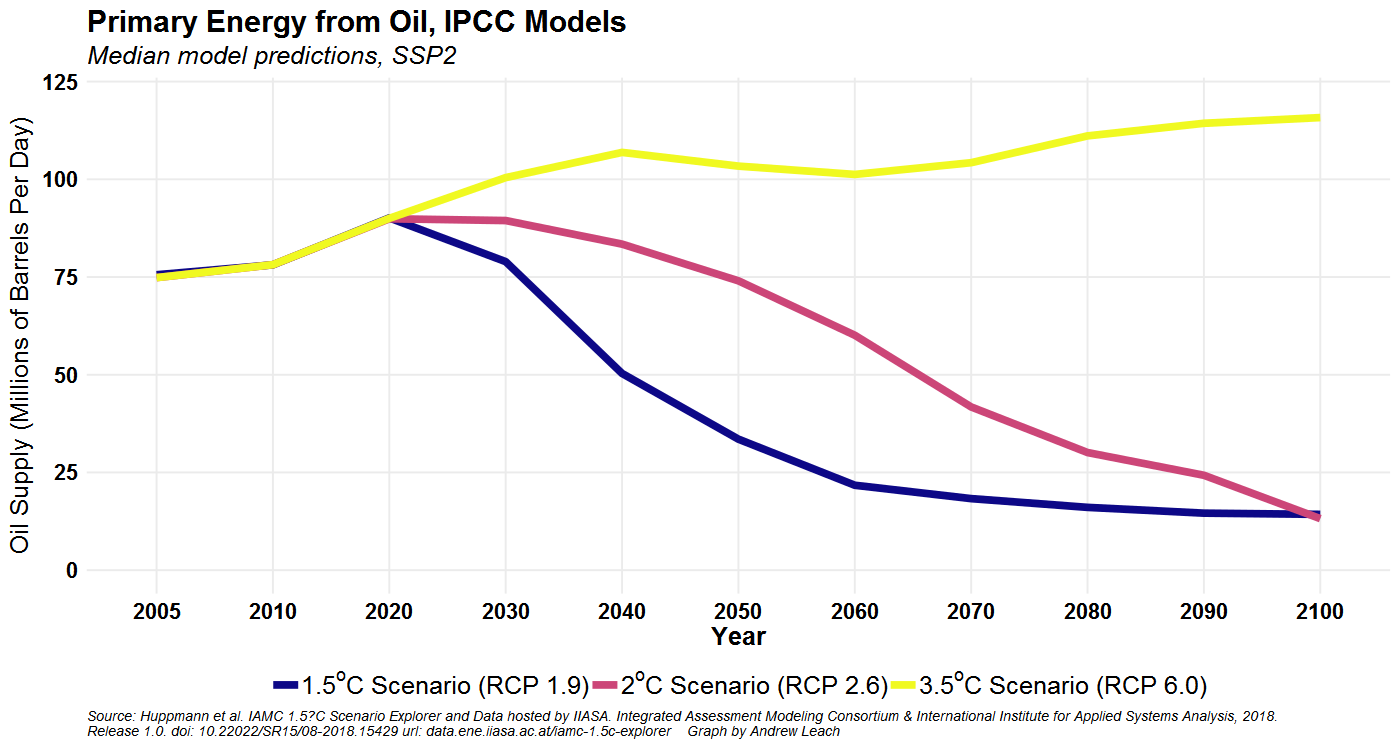 Basically, this echoes what I’ve written above.  Policies consistent with meeting commonly-articulated global climate change goals generally imply lower global oil consumption.  There’s uncertainty, sure – these are median projections under middle of the road assumptions about population growth, productivity, and urbanization. But, there’s not enough uncertainty that you can say that there are credible projections of global oil demand increasing, at least not over the time horizon of new oil sands projects, under the assumption that we act aggressively on climate change.

We can certainly discuss whether policies and corporate strategy should assume further action on climate change. I think it’s perfectly defensible to say that we should prepare for what we expect to see, not for what we hope will occur.  But, it’s important to understand what people mean when they say that oil demand will keep increasing. They are telling you that they believe (one assumes it’s not their hope?) that the world won’t act on climate change and so we should set our policies accordingly.