Browse: Home / Uncategorized / To whom is Jason Kenney selling a bill of goods on Energy East?

The economic case for Energy East was a simple one based on three factors: increasing oil sands export demand, an existing, under-utilized gas pipeline in the ground from Alberta to Ontario, and insufficient other pipeline routes available (Gateway and KXL having been stalled) to meet growing export demand.   This meant that, for Alberta producers, the best available alternative for shipping marginal barrels would have been shipment by rail, a more expensive option than shipping by pipeline, leading to lower realized values for Alberta products than would otherwise be the case.  Energy East offered a middle ground: an expensive pipeline, made a little cheaper than it would otherwise be because of the option to use existing pipeline to shrink the geography of a Hardisty to Cacouna, QC and/or Saint John, NB route for oil.   Energy East offered the possibility that, for around $10 per barrel, a shipper on a 20 year contract would be able to access global markets (the table below shows the illustrative tolls used in the application, which would doubtless have increased as the costs of the project mounted).

For shippers without long term contracts, the tolls which would likely set the differential, the cost would be closer to $16 per barrel shipped.  Today, shippers without long-term commitments can (assuming they can access capacity) move spot barrels for between $10 (Enbridge) and around $13 per barrel (Keystone) all the way to the Gulf Coast.  Even if we assume that the much-shorter routes to the West Coast offered by TMX and the additional barrels on Keystone XL saw higher tolls than the existing systems, it’s hard to imagine that a fully-built Energy East comes out as the cheaper option compared to any other pipeline. 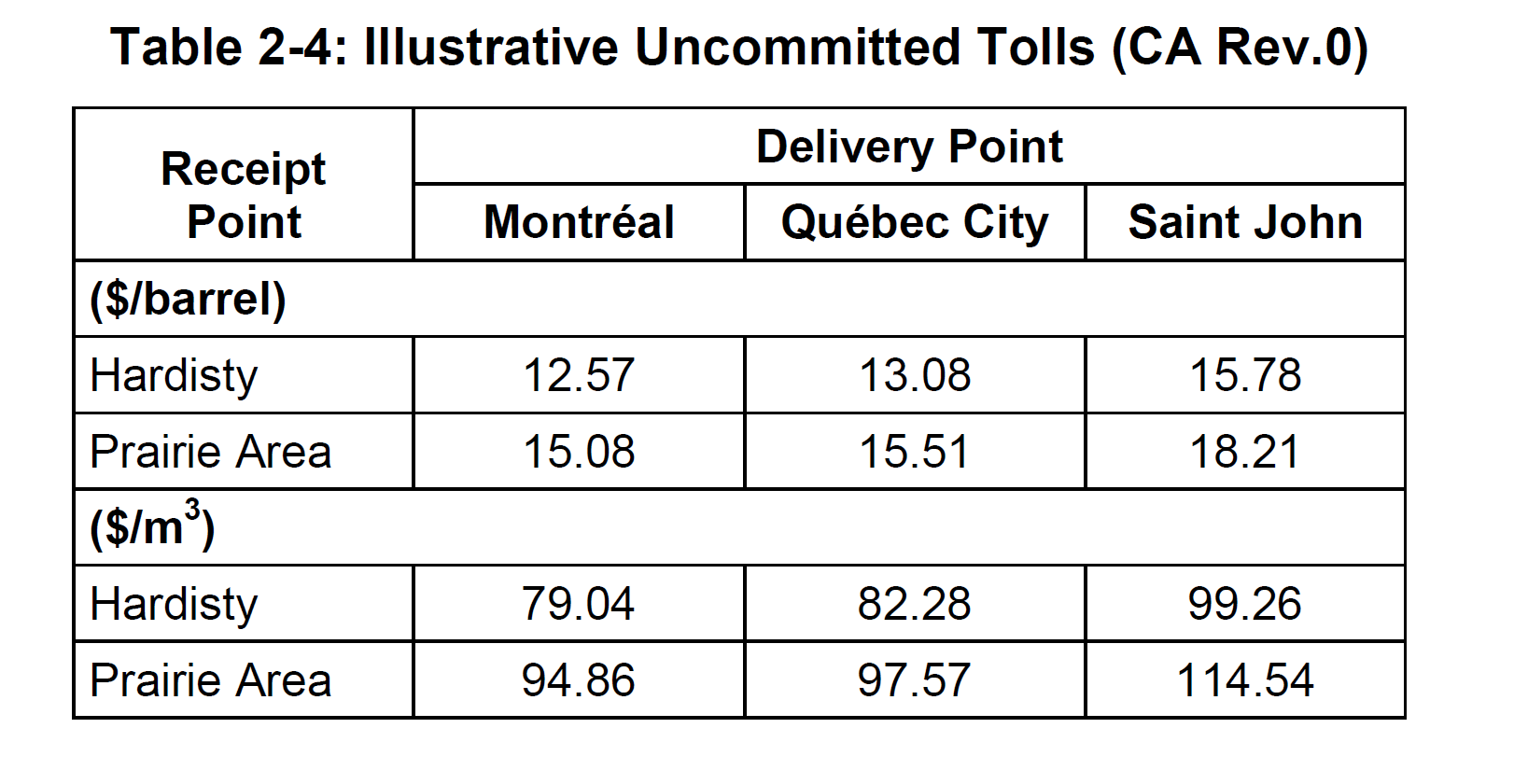 These more expensive tolls are part of the reason that shippers including the Alberta government were willing to move barrels to an under-subscribed Keystone XL open-season in 2017. For comparison, the 20 year contract the Government of Alberta signed on Keystone XL has an expected toll of $7.21 per barrel.

With Keystone XL, the proposed Enbridge expansions (Lines 3 and 67), and (likely still after tomorrow) TransMountain holding regulatory approval, even the ever-optimistic CAPP forecasts for oil sands production suggest there is no longer a need for Energy East – there simply aren’t enough barrels to fill it.  As shown on the Figure below, what was once a bullish forecast for oil sands growth fell away as costs increased and global crude prices declined precipitously – the price of WTI today is half of what it was in June 2014 when the forecast in red was issued by CAPP. 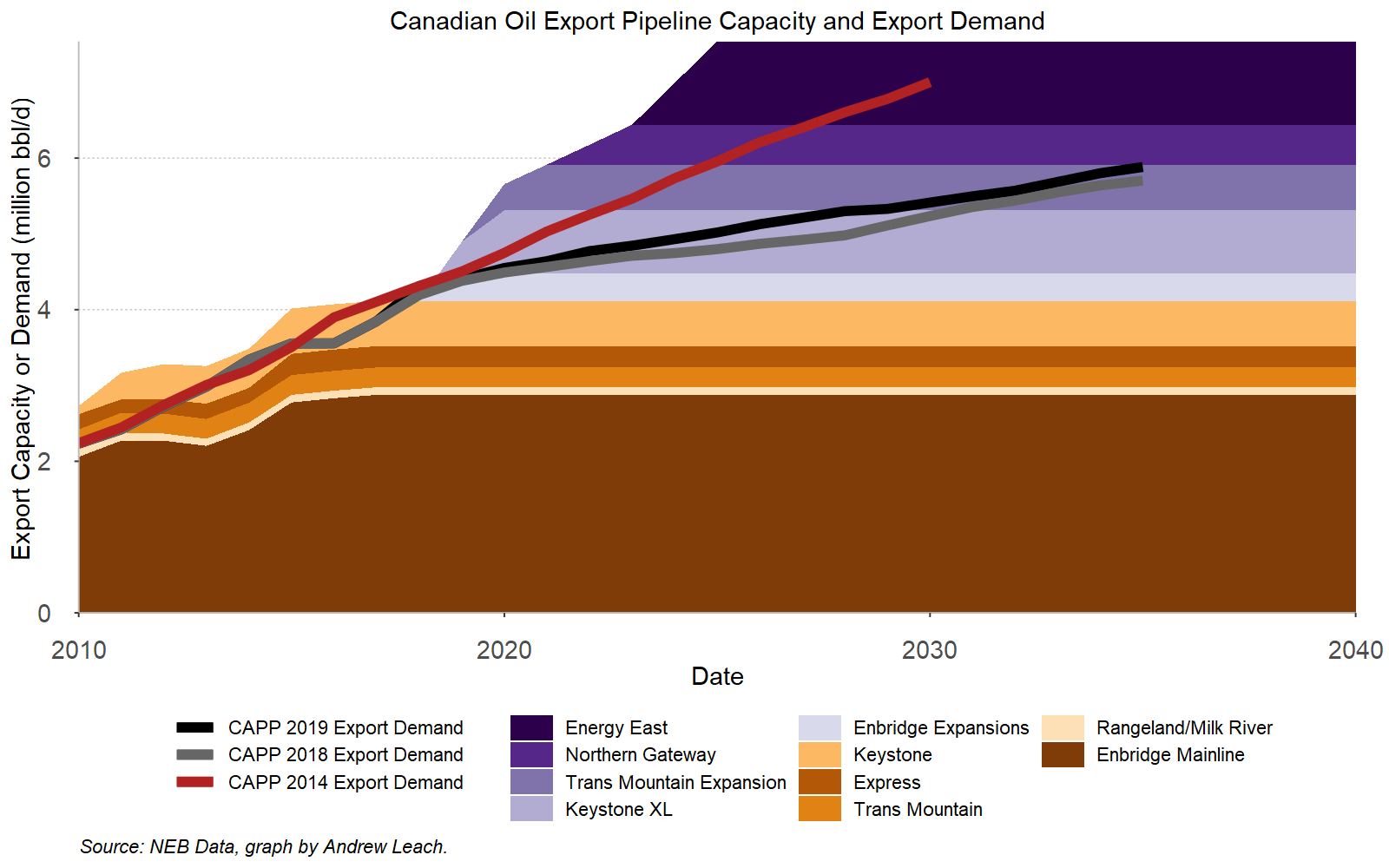 Despite clear evidence that the business case for Energy East has disappeared, last week saw Jason Kenney out in Saint John touting the virtues of Energy East and weaving his usual tale that federal government changes requiring an emissions assessment, and not pure market economics, were behind its demise.  Not content with that, Premier Kenney dangled the possibility of another refinery in Saint John in front of New Brunswickers.  Luckily, that provides an angle for us to understand the degree to which he’s bending the truth. 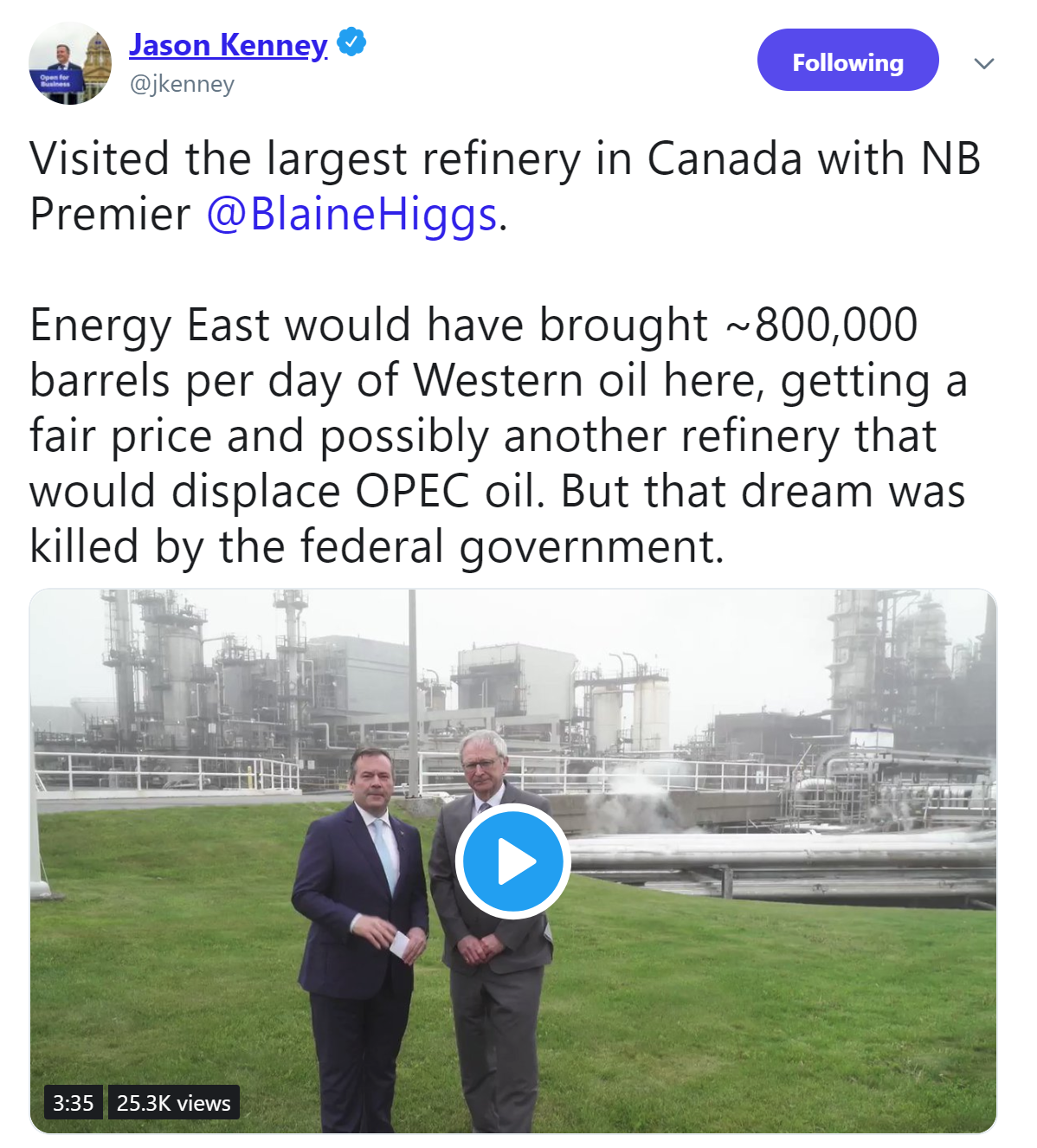 Why would another refinery suddenly be viable at Saint John? Let’s make sure to account for what Premier Kenney often points out vociferously (albeit in other contexts): Canada has among the highest environmental standards in the world for the oil and gas industry and capital can flow anywhere in the world to seek a return on investment. Let’s also remember that the Irvings are hardly known for building industrial production facilities as an act of charity. The only reason more investment at the Saint John refinery would suddenly make sense with Energy East in place is if the existence of the pipeline allowed the refinery to access materially cheaper feedstock than would otherwise be the case.  Some of that would happen with Saint John becoming an export port – perhaps a swing of a dollar or two per barrel – but even that becomes a problem for Jason Kenney.  That discount doesn’t just help Saint John, it hurts Alberta.

Suppose that light crude pricing at Saint John shifts from a small premium to Brent (you have to draw the crude to Saint John today) to a small discount to Brent with a pipeline in place (you’re trying to get buyers to take crude away from Saint John), the netback to Alberta is now the global price net a Saint John port discount, net a pipeline toll.  In other words, Edmonton light crude would need to trade at a discount of $10 per barrel or more to Brent just to make the Irving refinery as well off consuming Alberta crude via Energy East as they are today consuming imported crude.  To make them better-enough-off to want to invest in additional refining capacity (given those high environmental and other ethical standards), they’d likely need to see an incremental discount beyond just the swing in port pricing that would occur from the pipeline being built. This increased discount would be reflected in further discounted values for crude in Alberta.  We could run the same calculations for heavy crude – if you think a new full-conversion refinery will make sense in Saint John, it must be the case that there’s cheap heavy crude in Saint John relative to other global markets.  Ergo, the price of heavy crude in Alberta must be no higher than that cheap price, net a $10+ pipeline toll.

Here’s the question someone should have asked Jason Kenney but didn’t: at how large of a discount to global prices do you expect Alberta crude would be selling with Energy East in place?  If his answer isn’t somewhere well-above $10 per barrel, then he’s describing a world where there’s no additional incentive to build a new refinery or a coker retrofit in Saint John and perhaps one where there magically aren’t pipeline tolls.  If his answer is somewhere well-above of $10, as it should be given the costs of the pipeline, then the natural follow-up question is why he’d ask Alberta producers to take a big haircut relative to what they could receive if barrels were moved via existing systems south and new pipes to the West Coast in order to subsidize refining in Atlantic Canada.  In case he needs it, some good background for an answer to such a question might be found in the 1980 budget speech of one Allan J. MacEachen.

The reality is that Jason Kenney is probably less interested in what a commitment to Energy East would actually mean to New Brunswick refiners or to Alberta oil producers than he is in waving the empty promise of a refinery expansion backstopped by discounted Alberta crude in front of the voters of Saint-John-Rothesay and Fundy Royal between now and October.  There was once a time that Alberta premiers would get pretty nervous with politicians touring Eastern Canada creating those kinds of expectations in the run-up to a federal election.