Good afternoon ladies and gentlemen. It’s a pleasure to speak to you today to express my overall support and to provide context for the Greenhouse Gas Pollution Pricing Act, Section 5 of Bill C-74.  This legislation is the backbone of the federal government’s approach to climate change and will complement the measures already taken by Canada’s provinces. It will also allow provinces without carbon pricing systems to benefit from the federal architecture to impose a carbon price and to receive the revenue collected from it.  This combination – a federal policy with provincial-level flexibility – recognizes the diversity of provincial economies yet still allows for federal leadership on climate change.

The Bill guarantees that carbon prices will apply on nearly all carbon emissions from energy use in Canada – from the cars on the 401 (and yes, the 417) to the largest industrial facilities.

The bill provides for the federal price to be applied in provinces without sufficiently-stringent carbon pricing policy.  Assuming no changes in provincial policies, implementation of this bill would likely exempt the provinces of BC, Alberta, Ontario and Quebec and likely Manitoba. These provinces, home to 90% of Canada’s population and responsible for 83% of Canada’s emissions, would potentially be subject to this legislation were their domestic climate change policies to be significantly weakened.

Why a carbon price? Simply put, a carbon price leverages the power of the market to enable emissions reductions at the lowest possible cost.  It does not rely on governments to determine who should emit how much or what their technology decisions should be – it relies on individuals to make decisions. The carbon pricing plan proposed in this Bill, like current policies in BC, Alberta, Ontario and Quebec, puts a price on carbon emissions from most sources, not just large, industrial facilities. The broader the of carbon pricing, the lower will the price have to be to meet a given target or the greater will be the emissions reductions at any given price. As you can see from the graphic below, emissions in Canada are not just a big industry issue. 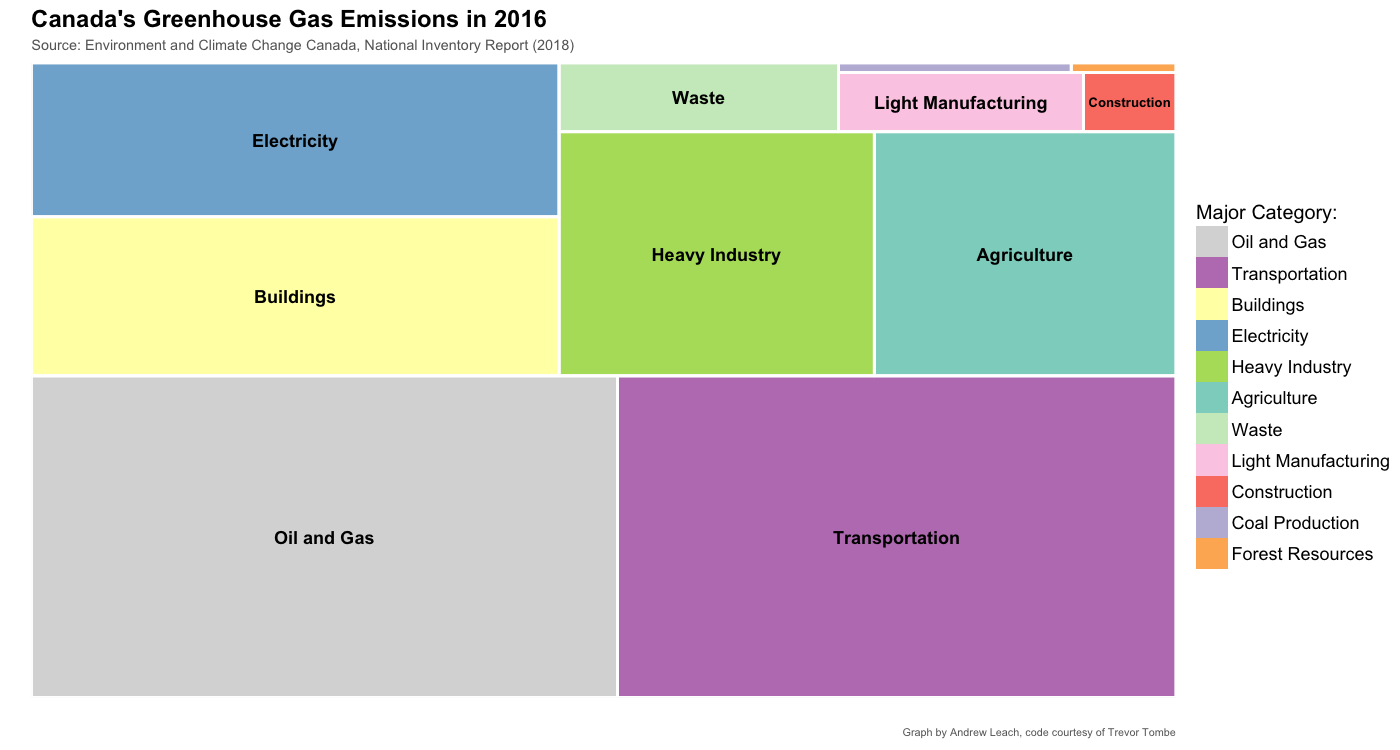 Do carbon prices work? Absolutely.  We have plenty of evidence from BC’s carbon tax, which has been in place since 2008, to say that carbon prices reduce emissions below where they would otherwise be.  Work by Nic Rivers at the University of Ottawa among many others has shown this conclusively. This doesn’t mean they are magic – they will not always lead emissions to be lower than historic levels, especially when macroeconomic growth is rapid or technological change is slow, but I can assure you that demand curves slope downward, despite frequent claims to the contrary. When emissions have a price, we will use fewer of them.

Why not have a one-size-fits-all federal policy? Our provincial economies have very different emissions profiles and means to reduce emissions. In some provinces, electricity is already carbon-free while, in others, long-lived, fossil-fueled assets provide electricity.  In provinces such as my home province of Alberta, about 1/4 of our GDP comes from what are known as emissions-intensive and trade-exposed sectors.  The national average is less than 4% and some provinces have half of that still.  A measure which is a good fit for Ontario and Quebec might cause chaos in Alberta and Saskatchewan, while an approach such as that previously implemented in Alberta would fail to cover almost all of the emissions in many provinces in the country.

The federal government has chosen wisely here, not only providing the provinces with the means to both select their own policies but also to determine the uses of the revenue from federally-imposed carbon prices. Here, provinces will certainly have different priorities. Some examples: University of Calgary’s Trevor Tombe showed that Ontario could implement a carbon tax and, without changing the distribution of income, boost its sales tax credit by 80% and eliminate health care premiums. Alberta and BC have chosen policies with progressive outcomes – in both provinces, the bottom 40-50% of income-earners were better off with the carbon tax than without. These choices are far-better made provincially than federally.

I do have some concerns with this legislation. I am concerned with the discretion provided to the Governor in Council to apply these measures to provinces. Section 189 (1) holds that (Cabinet) may, “take into account any factor (it) considers appropriate, including the stringency of provincial pricing mechanisms,” to determine whether a province should be covered by the federal price. Here, I’d like to see a clearer definition of stringency. Conveniently, the price on carbon allows just such a test and judging by this standard would prevent an outcome where Cabinet applies to one province a price on carbon far higher than that which it might allow to apply in others. I am also concerned that Section 188 does not stipulate that, in the event that a carbon tax is collected from a province, that total federal transfers to that province will increase…only that an amount equal to the carbon tax revenues will be spent in that province. While the government intends to address these issues through regulation, these clauses may leave an undue breadth of federal government power.

Thank you for your time and attention and I look forward to your questions.