The following is a transcript of my remarks to the House of Commons Standing Committee on Environment and Sustainable Development from Monday, January 28. 2019. Please check against delivery.

Thank you for inviting me to appear before your Standing Committee to make the case in favour of carbon pricing.

I am an Associate Professor at the University of Alberta where I teach and conduct research in our energy and environment programs.  I’ve previously served as Visiting Scholar at Environment Canada from 2012 to 2013, and as Chair of Alberta’s Climate Leadership Panel in 2015. Since 2016, I’ve contributed to some aspects of design and implementation of the federal carbon pricing program we are here to discuss today.

There is near-unanimity amongst economists that imposing a price on carbon emissions will deliver emissions reductions at the lowest cost to the economy.  Why? Because leveraging the market through carbon pricing allows individuals and firms – those who know best their costs of reducing emissions or the value they derive from emissions – to decide when to emit and pay the carbon price and when to choose other actions.  To derive the maximum benefit from these policies, prices should apply to as broad a set of emissions as is feasible. In what follows, I hope to address a few common questions which come up with respect to carbon pricing.

Why tax consumer emissions at all? We often see Canada’s emissions painted as a large industry issue – we’ve all heard Premier Ford’s calls to penalize polluters not commuters. Here’s the problem: nationally, almost two thirds of emissions come from small emitters: factories, cars, trucks, buildings, not from large, industrial facilities. In some provinces, that share is higher than 90%. Emissions policies which exempt these emissions or address them only partially will make meeting any emissions reduction goals much more expensive and impose punitive costs on a select few industries. 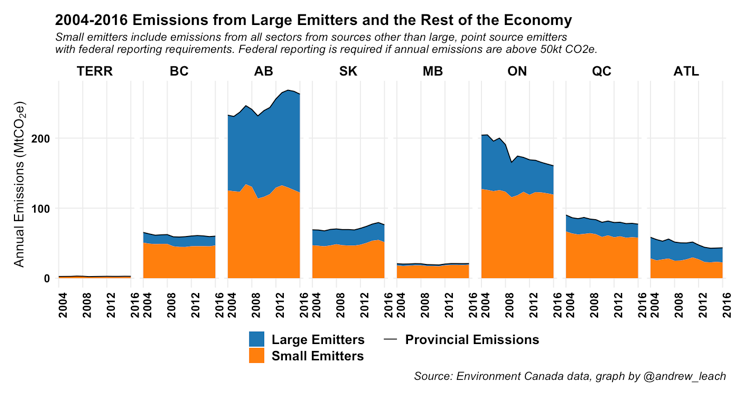 What about impacts on low income Canadians? Or rural residents? On their own, carbon taxes may be is regressive, and we often see concerns that costs imposed on lower-income households or on those in rural regions will be prohibitive.  Assessing distributional impacts is important, but these concerns have been largely offset through the use of carbon tax revenues to provide lump-sum transfers or other fiscal benefits to affected groups where carbon prices have been imposed. But, of course, we must be careful not to claim that these rebates or transfers are sufficient to make everyone better off. They’re not.  Importantly, these solutions also do not compromise the effectiveness of the carbon price.  The price remains on emissions and that’s what will influence behaviour. I can’t help but notice, though, that some of those with concerns about regressive impacts seem to become very concerned with any redistribution of revenues deployed to address those concerns. 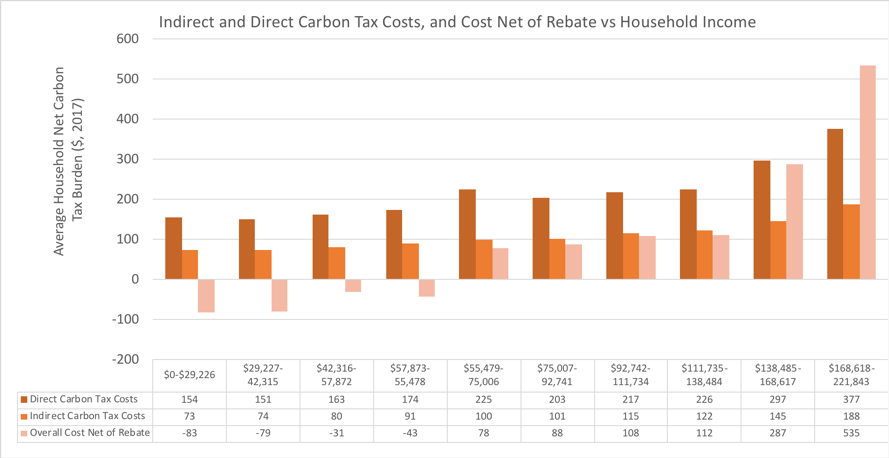 We also hear concerns about carbon pricing applied to large industries and, in particular, about the competitiveness impacts on trade-exposed sectors.  These concerns are, again, real, and particularly affect our resource-dependent provinces.  Here, economics research provides a clear solution: the allocations of emissions credits on the basis of output along with a carbon price means that the impact of carbon pricing on overall profitability is mitigated, while firms retain the incentive to reduce emissions and to innovate.  Not surprisingly, those with concerns about competitiveness also have concerns with these allocations, which the Leader of the Opposition has frequently characterized as exemptions for industry from the carbon price.  In my own research, I’ve shown that oil sands firms, for example, would capture the same value from an emissions reducing innovation under a carbon tax with or without the allocation of emissions credits, but would not capture that value if emissions were exempt from a carbon price (see below).

In the New York Times in December, US Senate Environment Committee Chair argued that, “making energy as clean as we can, as fast as we can, without raising costs to consumers will be accomplished through investment, invention and innovation.” We see similar claims in Canada that rather than pricing carbon, we should rely on innovation to tackle climate change.  This is a false dichotomy.  Economists like David Popp consistently find that price-based policies provide far better incentives for innovation than regulations and without the direct expense required for subsidies.  A carbon price creates a market for low-carbon technologies and rewards those who can reduce emissions in their supply chains without relying on the government to pick specific winners and losers.

Does this mean that carbon pricing is a panacea or that it’s the only option available to us? No.  Regulations, subsidies, and other policies could have the same impacts on emissions but the evidence tells as that, insofar as we rely on those tools, we’ll reduce emissions at greater total costs to the economy. We might also suspect that some of those who are today opposed to carbon pricing might also find reasons to oppose other policies were they to be proposed and implemented.

Thank you for welcoming me here today and I look forward to your questions.