This week, the federal government announced more details of their Output Based Pricing System (OBPS) which targets greenhouse gas emissions from large, industrial facilities. These policies are complex (although perhaps not as complex as their acronyms make them sound) and build on a long line of similar policies proposed and/or implemented in Canada.  In this post, I take you through the history of these policies, discuss which facilities are covered, and explain why the system implemented in Alberta and now being implemented as part of the federal backstop is far better than other systems in preserving competitiveness and providing rewards for innovation.

The basic elements of the federal OBPS mirror the Carbon Competitiveness Incentive Regulation (CCIR) implemented in Alberta which, itself, borrowed much of its design from Alberta’s Specified Gas Emitters Regulation (SGER) first implemented in 2007.  You can trace the lineage even further back in time to the Chretien/Martin era Project Green policies and the version of those policies which became part of the Harper Government’s Turning the Corner Plan in 2006.  Each of these policies shares two common elements – a price on carbon emissions and a system of allocations through which firms receive some number of emissions credits for free.  Think of your income taxes, which define a rate and offer a series of tax credits, and you’re on the right track. 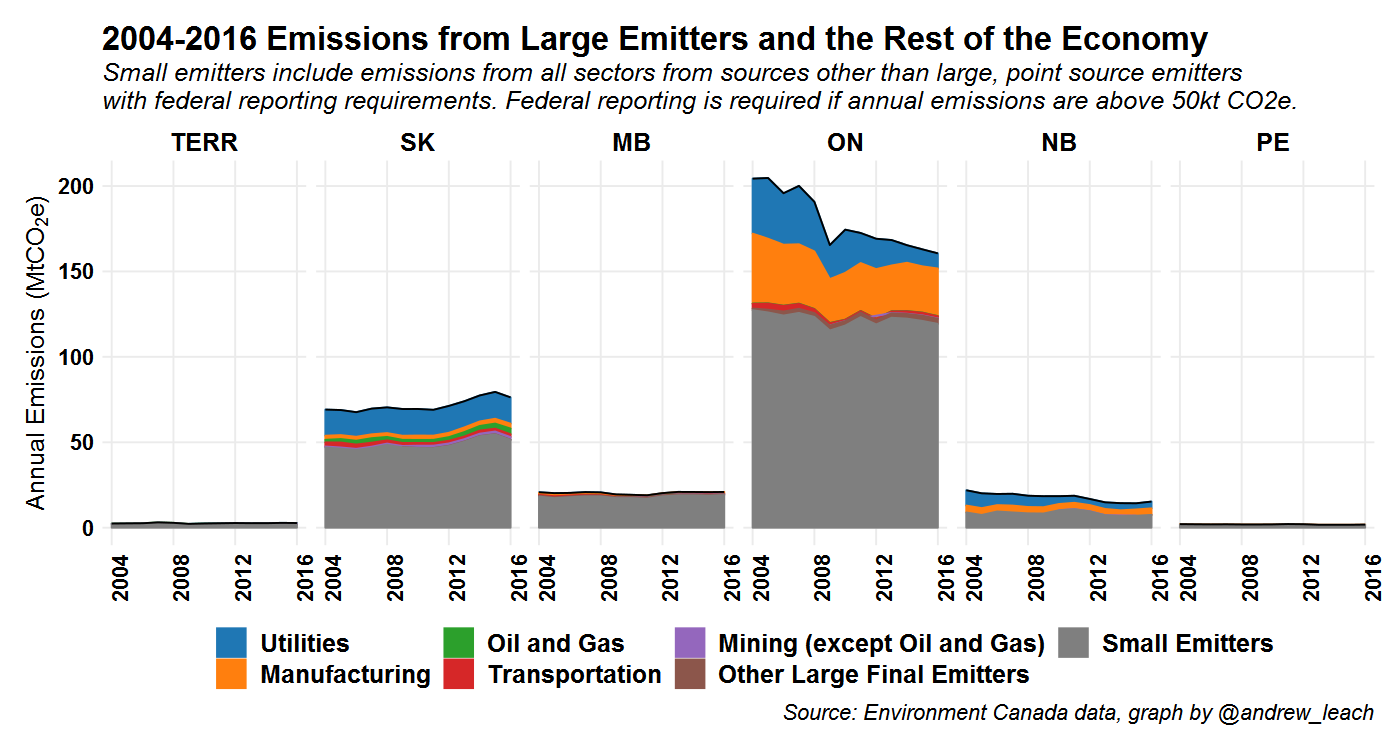 As you can see from the figure above, the policy ends up covering a relatively small share of emissions in the provinces it affects, as the emissions shown in grey will be covered in large part by the carbon price.  Most of the emissions covered come from utilities, manufacturing (which includes refining), and mining with some oil and gas facilities covered in Saskatchewan.

Let me explain with an example of an oil sands facility and using Alberta’s output-based allocation system – the math would be the same for facilities in covered sectors under the federal program. In the table below, I’ve shown financial metrics for a prototypical oil sands in situ site under no policies, a $50 per tonne carbon tax, and 3 different implementations of emissions credits or exemptions.  The Alberta CCIR mechanism which, like the federal OBPS, allocates emissions credits as a function of output at a rate which declines over time: in situ bitumen producers receive 0.056 tonnes of emissions credit per barrel of bitumen produced in 2019, with a reduction of 1% per year over time. The SGER mechanism is similar, but the allocations are based on the facility’s own historic emissions intensity, with an allocation of 80% of the facility’s year 3 average emissions intensity, which in this case is 0.060 tonnes per barrel of bitumen. The exemption policy is simpler, and gives an exemption from pricing of 80% of emissions in each year to the facility. To simplify the comparison, I’ve used a constant carbon price of $50/tonne, adjusted for inflation and oil prices based on market prices sampled in mid-November.

I’ve shown you two project-level financial indicators: the internal rate of return and the implied WTI oil price that the project would need to see over its lifespan to make a 10% rate of return on capital, a metric that is referred to as supply cost in the oil and gas industry.  With no policies in place, the project I’ve modeled would be viable with WTI prices above $54.91 per barrel.  A carbon tax increases that requirement to $57.42 – a significant jump.  However, credit allocations in the rightmost three columns reduce that break-even oil price requirement back to almost what it was without any carbon price in place at all – about $55 per barrel.  We could adjust the stringency of each implementation to make them equivalent, but I haven’t done so here.

A while back, in a paper in the Canadian Tax Journal (Issue 60, Number 4), I compared policies like the Alberta benchmark-based CCIR and the facility-history-based SGER in terms of the incentives they provide to reduce emissions. Here, I’ll give you a quick version of that analysis and add-in the exemption policy.  We’ll look at two margins on which you could see a carbon policy acting: 1) reducing emissions by deploying abatement technology; 2) reducing emissions with design-phase changes in the project.  Only one of the three crediting mechanisms, the CCIR mechanism, acts on these two margins while also preserving the competitiveness of the project.

First, in all cases, lower emissions intensity reduces operating costs since you’re burning less natural gas, but the gains to new technology are always higher in the case of carbon pricing.  This is why economists like David Popp are always reminding us that carbon pricing is a key mechanism to advance for emission-reducing technology.  But, within the policy choices, the gains are not the same. The carbon tax and the CCIR mechanism always deliver the highest gains to innovation.

For the design-phase change, the carbon tax and the Alberta CCIR mechanism reward each tonne of emissions reduction with $50 of reduced GHG compliance costs plus the savings in operating costs.  In the case of the Alberta SGER mechanism, there is virtually no reward to design-phase changes because the lower emissions intensity in year 3 of operations reduces the quantity of free credits the facility receives for the rest of its operating life – essentially a penalty for innovation.  The exemption also provides limited reward since emissions are lower in the future so the value of the exemption of 80% of them decreases as well.  The Alberta CCIR case (the same policy as implemented federally) is also the only policy which allows innovation to turn GHG emissions reductions into positive cash flows.  If the facility reduces emissions to levels below the allocation benchmark, it will earn money from reducing emissions.  In the experiment I ran here, the facility is better off financially with the design-phase innovation under the carbon tax with CCIR-type allocations than it would be with no policies in place.

For the on-going emissions-intensity improvements, again the carbon tax and the CCIR-type approach provide the highest value for emissions reductions, equal to $50/tonne in both cases. The incentive to reduce emissions is not reduced by the allocation of credits.  The SGER-type approach does better here since it values any emissions-intensity improvements achieved after the year 3 benchmark at $50/tonne as well. The exemption continues to reward emissions reductions with only 20% of the established carbon price, and so places much lower value on the innovation.

If you want a policy which both rewards emissions reductions and preserves competitiveness, the best choice by far is an emissions price with an output-based allocation as implemented in Alberta under the CCIR or in the Canadian federal backstop under the OBPS.  It is absolutely not equivalent to offering an exemption on a given percentage of emissions which would not be good policy design.