Last week, the US Energy Information Administration posted the early release of their Annual Energy Outlook which contains a short summary report and access to some of the data tables which will be included in the document itself when it’s released in April. I was curious to see one element in the data – their prediction of oil imports into the US from Canada.  What I saw surprised me, and I am still working on an explanation…

Before I get to that, some context.  Like just about everybody else with an interest in energy, I’ve been captivated by the debate over pipelines from the oilsands that’s taken place since early last summer.  When the State Department rejected the Keystone XL pipeline on January 18th, I spent a lot of time reading their analysis and going back over the EIS documents.  A quote from page 5 of the State Department decision letter jumped out at me:

“Regarding economic, energy, security, and trade factors, the economic analysis in the final EIS indicates that, over the remainder of this decade, even if no new cross border pipelines were constructed, there is likely to be little difference in the amount of crude oil…imported from Canada.”

These comments are based on Appendix V of the final Environmental Impact Statement on KXL, and run counter to  most of the rhetoric in favour of increased pipeline capacity, which suggests largely that Alberta will be landlocked in bitumen by 2020 if significant, new capacity is not built soon. Cardno-Entrix analysis found that, without any new pipelines or capacity expansions, “WCSB production would be curtailed by approximately 0.8 mbd by 2030,” and that, “because of existing available line capacity, oil sands production would not begin to be curtailed until after 2020.”

So, here’s the dilemma – if you look at NEB data, the need for new export capacity is abundantly clear. 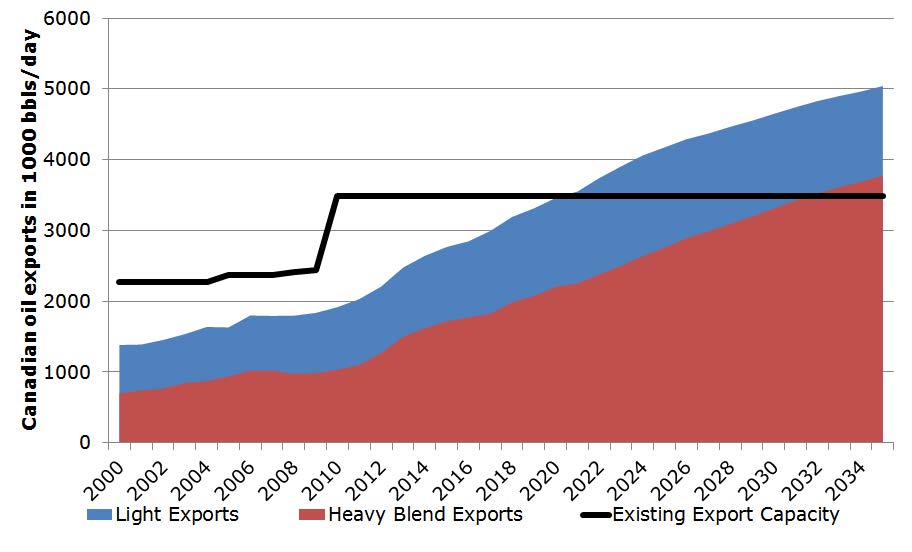 On the graph above, you can see National Energy Board export availability forecasts and actuals, from their 2011 Canada’s Energy Future report, along with existing export capacity data from CAPP’s June 2011 forecast. The NEB data for heavy blend includes the diluent volume added to conventional heavy oil or oilsands bitumen to reach pipeline spec (approximately 25-30% by volume), so the figures represent the actual pipeline capacity required.  Pipeline capacity has also been adjusted to accommodate approximately a 60-40 light-heavy split of annual shipments.  As you can see, if you buy the NEB’s forecast, something has to give.  In order to maintain a comfortable capacity factor and avoid congestion, you’d need 2.5-3 million barrels per day of NEW pipeline capacity by 2035 – that’s KXL, Gateway (expanded to 800,000 barrels per day), TMX, an expansion of Enbridge Clipper, and maybe another couple of hundred thousand barrels per day from somewhere else. That’s a lot of new capacity.

So, this long digression brings us to the EIA numbers for Canadian imports, which would provide either a contradiction or validation for the State Department/Cardno Entrix scenario.  Well, from what I can tell, the EIA numbers are a whole new ballgame. 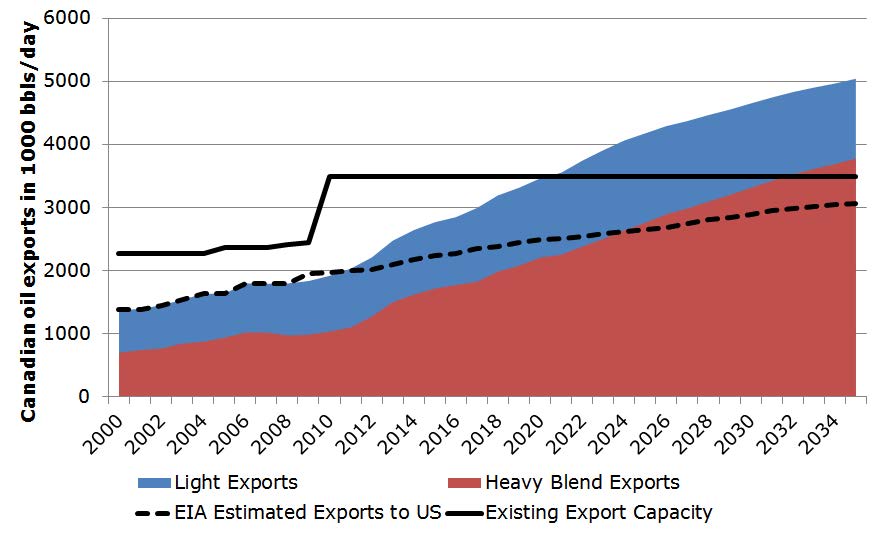 As you can see, the EIA estimate (from Table 146 here) has almost 2 million barrels per day fewer imports from Canada than the NEB expects in terms of exports from Canada.  As I can see it, there are four possible reasons for this discrepancy.

First, it’s possible that I am reading the EIA data incorrectly since definitions for crude oil are rarely consistent, even within one agency.  I matched the historic series between NEB crude oil exports and EIA crude oil imports from Canada, and they match, +/- 2%, in every year from 2000-2008, and diverge in 2008 and 2009 by 5 and 9% respectively, with the EIA figures higher in both cases. As far as I can tell, both data sets track gross crude oil (heavy, light, dilbit, synbit, etc.) including diluent volume, so they should be comparable.  Until the final report comes out, I can’t be sure.

Second, the EIA may be incredibly bullish on US domestic supply to displace US imports, thereby limiting demand for all imports, not just Canadian oil. They are bullish, but that shouldn’t be enough to drive the large reduction in Canadian imports. As shown below, the EIA still sees US oil imports at almost 10 million barrels per day by 2035, with Canada providing the largest share. 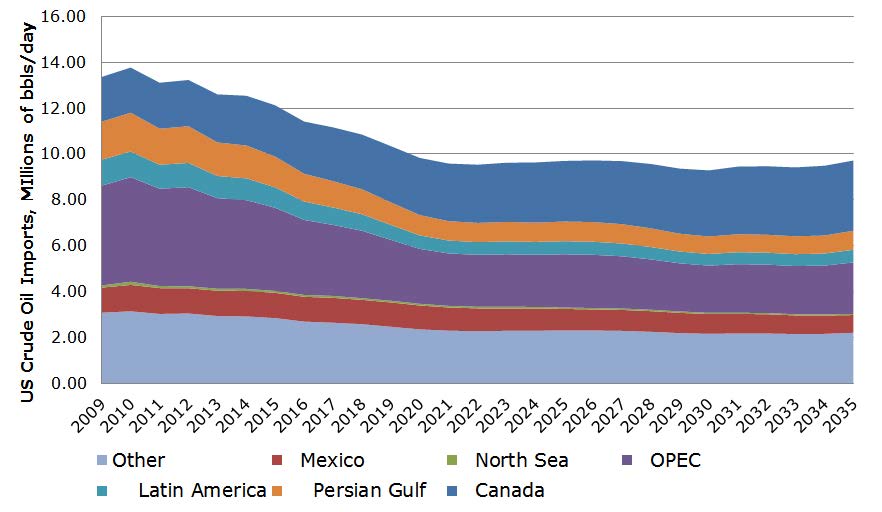 Third, the EIA may be really bullish on West Coast pipeline expansions.  I doubt this is the case – this would imply Gateway, TMX, and about 1 million barrels per day of additional capacity over and above that built and operational by 2035.  In fact, it would likely imply more capacity than that since at least some of the oil shipped off the West Coast would be expected to go into the US anyway, via California.

Finally, and this will be the elephant in the room, perhaps the EIA has a much less bullish view on Canadian oil production.  This would be a significant change from their Fall 2011 International Energy Outlook which had nearly identical predictions to those in the NEB forecast – 6 million barrels per day of Canadian oil production by 2035. Perhaps the EIA, like myself and many others, is concerned about the impacts of oilsands cost inflation on future production.  Last week, a Raymond James report by analyst Justin Bouchard and Associate Christopher Cox estimated that cost inflation could trim over 1 million barrels per day of proposed projects from the queue.  If you extend that analysis out to 2035, it’s not hard to conceive that you could remove another million barrels of capacity if costs keep growing at rates seen over the last decade.

I’m definitely curious as to what’s driving these EIA numbers, and I’d welcome your input while we wait until April to find out.