Today, with great praise from industry, a new report, commissioned by the Alberta Government, on oilsands GHG emissions was released.  This report, by Jacobs Consultancy, assesses the degree to which oilsands GHG emissions compare to other sources of crude entering the European Union. The results are not particularly surprising, nor are they likely to significantly bolster the Alberta Government’s case.

The EU FQD, for those not familiar with it, assigns GHG ratings to EU vehicle fuel based on the feedstock from which that fuel is produced.  Gasoline produced from almost any source of oil on the planet is labelled as having 87.5gCO2e/MJ of GHG emissions, while fuel produced from an oilsands (or natural bitumen) feedstock is labelled as 107gCO2e/MJ.  Since the EU will require overall reductions in the emissions footprint of gasoline supplies, the FQD makes oilsands-sourced products less valuable in the EU marketplace.

First, let’s be clear – the EU’s Fuel Quality Directive as proposed singles out oilsands and allows many sources of crude with similar GHG emissions to enter the EU without facing a similar carbon penalty. In my view, that’s wrong, and Canada should oppose it on those grounds.  Thing is, I don’t see how today’s report helps us to do that in ways we could not before, or changes what I think the strategy should be.

What do we learn from the report?  Well, first we learn that almost all oilsands production, with the exception of some cold-flow production using Cold Heavy Oil Production with Sand (CHOPS) techniques, would have higher GHG emissions per barrel than, “the range in carbon intensity of gasoline produced from representative crude oils refined in representative EU refineries.” The shaded area in the Figure below shows that range of representative-crude oil-sourced-gasoline emissions (wells-to-wheels) while the bars show the same measure for oilsands products based on different pathways to market. 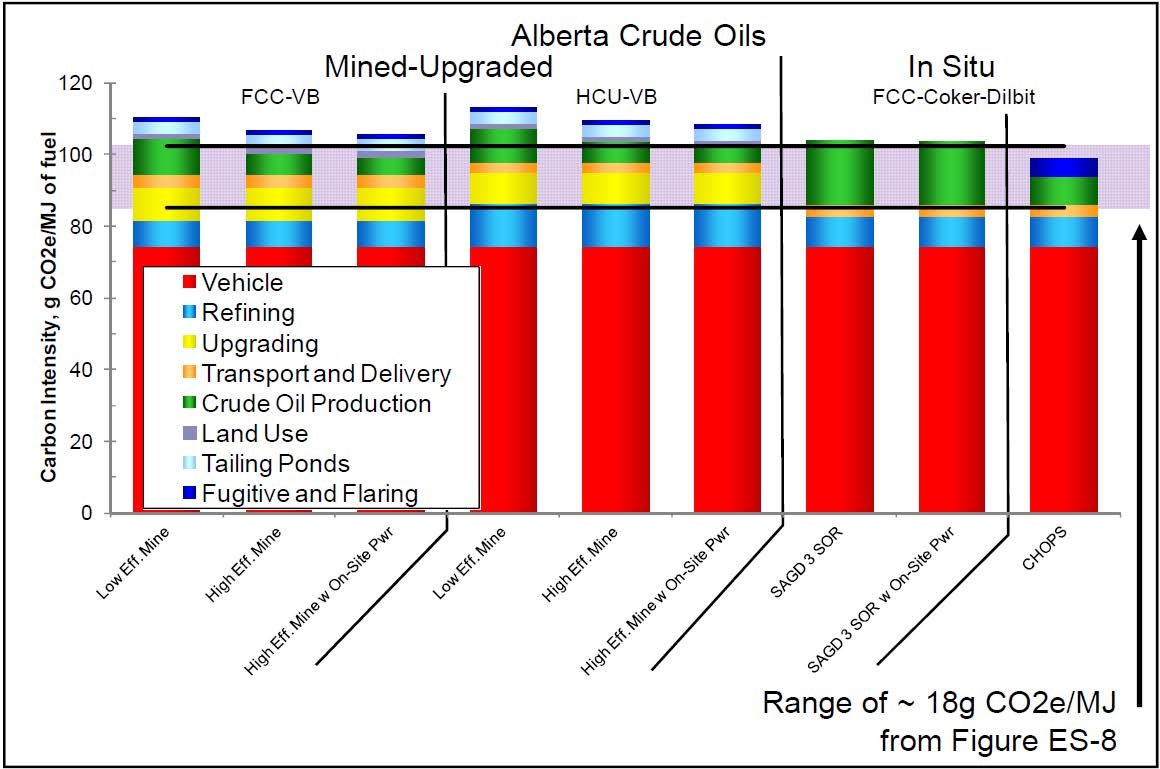 There are three additional arguments made in this report – first, the one we hear often that other sources of crude such as Venezuelan heavy and Nigerian crude have emissions much higher than the average conventional oil imported into the EU, second, that oilsands emissions are not represented by a single number, but rather a range, and finally that top-performing oilsands sites with certain refining pathways have emissions lower than the benchmark of 107gCO2e/MJ, and this may improve over time.  Again, this will not be news to the EU.

On the first one, the Figure below shows the argument being made – that when compared to other similar grades of crude potentially imported into the EU, oilsands are not that bad.  This figure certainly suggests that treating Venezuelan heavy as though it has emissions of 87g/MJ while treating oilsands as having emissions of 107gCO2e/MJ is discriminatory, but it does not suggest that the Figure applied to oilsands is inaccurate. 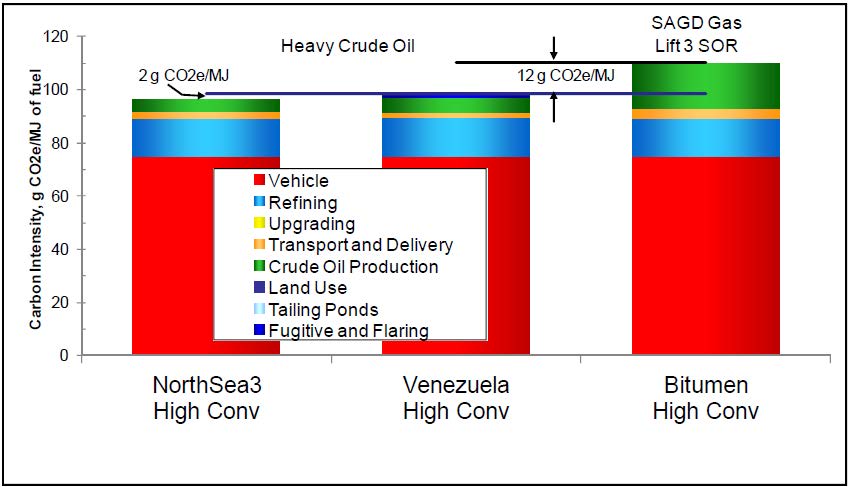 The second argument, that oilsands can not be represented by a single number, is also one which puzzles me.  The EU FQD allows individual sources of crude to certify to a lower number if that better reflects their emissions.  The Jacobs report finds that oilsands-sourced gasoline exported to the EU could range in emissions from 99-113gCO2e/MJ, while it would all be initially labelled as 107gCO2e/MJ.  Well, that’s obviously good for the 107-113gCO2e/MJ facilities, since they receive a lower stamp than they would in the accurate system which the Alberta government is seeking, while those below 107gCO2e/MJ are able to certify down to an accurate level.

Finally, the argument that oilsands will improve also seems to be defeated by the fact that individual sources can certify down.  In the Jacobs report, it is suggested that new innovations and improved processes could bring emissions from oilsands down by 8-10gCO2e/MJ. Great!  And, under the FQD, any producer achieving these improvements will be able to certify as such, thus increasing the value of their product in the EU.

This all comes back to the same problem with the EU system – it treats all crudes in the conventional or oilsands baskets as average, even though these crudes vary widely in actual GHG emissions/bbl.  In my mind, the solution remains the same – Canada and Alberta should be arguing for a benchmark at the top of each basket, which according to the new Jacobs report would imply an initial benchmark for conventional oil at 99gCO2e/MJ, and an oilsands benchmark at 113gCO2e/MJ, against which better performers can certify down.  This would ensure that countries have an incentive to provide verifiable emissions data, and that the emissions labels applied to crude oil products in the EU would accurately reflect their GHG emissions. I’m not sure why either Canada or the EU would argue against that.

Here’s the challenge – if you believe that oilsands emissions will decrease with better technology, and you believe that other sources of GHG-intensive crude like Venezuela and Nigeria won’t provide verifiable data, this is a sure-fire way to get your level playing field.  As a bonus, you’re actually arguing for stronger EU GHG policy to protect oilsands – how novel would that be?