Browse: Home / oilsands / Molasses, the viscosity of “natural bitumen”, and the FQD

Next week, the EU is expected to vote on the Fuel Quality Directive which would assign a higher emissions rating to Alberta oilsands than to other sources of crude oil, including some which may or may not actually have higher emissions than oilsands oil.

One of the many arguments against this policy made by Canadian government and industry officials is that it exempts other similar sources of oil, and turns small differences in actual emissions into large differences in rated emissions.  Environmental advocates, such as Hannah McKinnon, the campaigns director for Climate Action Network Canada, have countered that, “the oil industry was using bogus arguments against the European legislation since bitumen estimates in the policy applied to the resource in all countries, including Venezuela.” As far as I can tell, that’s not true, and the reason is viscosity.

The EU Fuel Quality Directive, as proposed, adopts the definition used by the US Geological Survey which defines natural bitumen on the basis of a two-step process based on the physical properties of density and viscosity. First, the USGS defines extra-heavy oil as oil which has an API gravity of less than 10° – API gravity is an inverse density, so lower numbers are more dense. In English, extra-heavy oil is any oil which is more dense than water (i.e. it sinks).

The second part of the definition classifies natural bitumen, which the USGS notes is also called tar sands or oil sands, as an extra heavy oil having a viscosity greater than 10,000 cP. Again, in English, it’s oil which sinks in water AND which is more resistant to flow than molasses in January.

What happens when you combine these two measures is of utmost importance for understanding the upcoming vote in the EU. The Table below shows you why.

Using the USGS filter, the line between extra heavy oil and natural bitumen is drawn right between Venezuela’s Orinoco deposits and the Canadian oilsands. The USGS finds that, “the Orinoco Oil Belt in the Eastern Venezuela Basin,accounts for about 90% of the discovered plus prospective extra-heavy oil in place (2.2 trillion barrels), ” while, “the three Alberta oil sands areas contain at least two-thirds of the world’s discovered bitumen in place (1.7 trillion barrels)”.

Based on my reading of the definition in the EU Fuel Quality Directive, which does not have a separate category for extra heavy oil, petroleum exported to the EU from Venezuela would be attributed a lifecycle GHG intensity of 87.5gCO2eq/MJ as with other conventional crudes, while oilsands would be labelled as natural bitumen, with a rating of 107gCO2eq/MJ, or 22% higher carbon emissions.

UPDATE: Based on new information received since this post was initially published, it’s possible that the line cuts through Canadian and Venezuelan deposits, with some above the line and some below the line. That doesn’t change the overall conclusion of this blog. 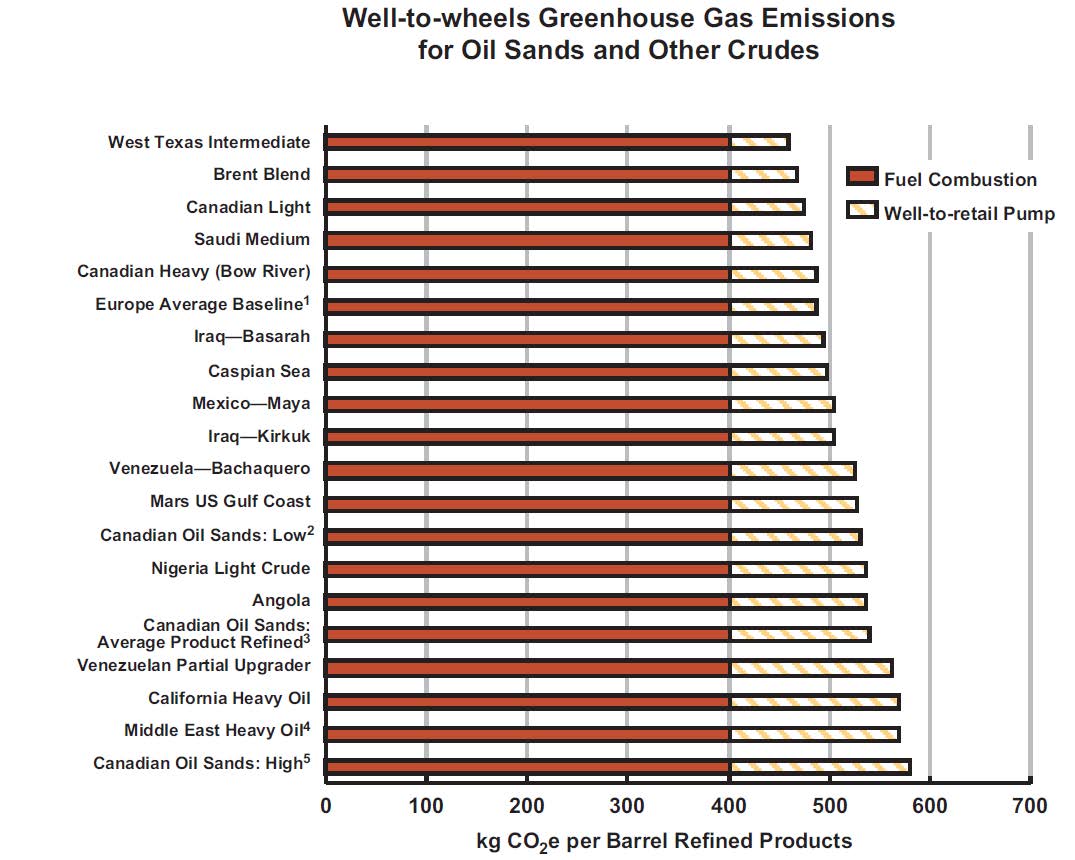 As you can see from the Figure above, Venezuelan crude, on a life-cycle basis, imported to Europe has emissions very similar to those of oilsands crude, and the future production out of the extra heavy oil deposits of the Orinoco may have higher emissions still. Despite this, the EU will treat them as though they are conventional light oil, all because they flow slightly more easily than molasses in January.

This is exactly why I wrote here that the EU is missing a great opportunity to demand emissions certification from all sources of crude oil.  Why not start all sources of crude at the high benchmark by default and allow those who can produce with lower emissions to report verifiable data and certify down. If you did that, I guarantee you that you would not see a 22% difference between Canadian natural bitumen and Venezuelan extra heavy oil, and you’d be adding a strong incentive to reduce emissions for 434 billion barrels of recoverable reserves of extra heavy oil.

UPDATE: Bottom line is that lifecycle GHG emissions from crude oil sources do not fit nicely into high or low baskets.  The EU FQD, as proposed, will treat some high emissions crudes as low emissions crudes, and they could greatly improve the policy by initially including all thermally assisted and/or heavy oil production at a high benchmark.

4 responses to “Molasses, the viscosity of “natural bitumen”, and the FQD”