The IRPP released a report today on the decline of economics papers by Canadian academics looking at Canadian issues.  Today’s report, authored by the University of Calgary’s Herb Emery, the University of Manitoba’s Wayne Simpson, and the IRPP’s Stephen Tapp  draws on earlier work  by Simpson and Emery published in the journal Canadian Public Policy.  The gist of the article comes across in the graphic below – academic economists at Canadian universities (note, this is very different from saying Canadian academic economists) examine Canadian issues in a smaller share of their papers today than at any time since the 1960’s, and that share has been declining steadily over time. 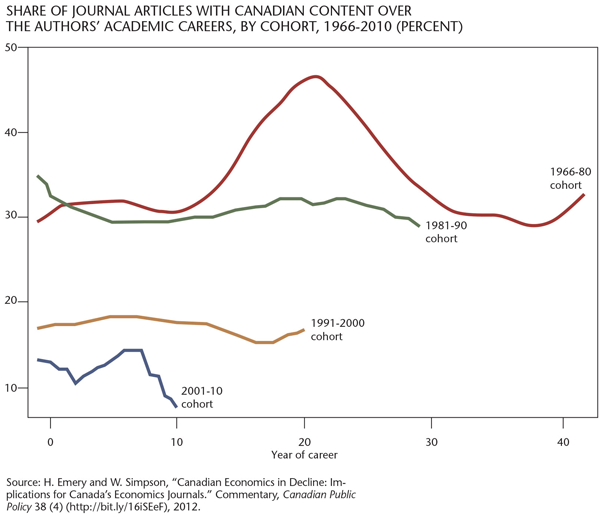 This report raises three questions for me. First, is this an issue? Second, why is this happening? And third, what if anything can be done about it? Emery, Simpson and Tapp look at each of these questions in their report, but I thought it worthwhile to add my thoughts as well.

I think the key issue is whether Canadian decision-makers and stakeholders have access to relevant, rigorous, and timely analysis of key policy issues. In order for work to be relevant to Canada, it does not have to be a paper specifically about a Canadian issue, nor does it have to be performed by an academic at a Canadian institution nor does it have to be published in an academic journal.  As a result, the data as presented in the figure above likely under-estimate the share of articles published which have relevance to Canadian policy issues, and certainly do not represent the only articles being written directly on Canadian policy issues or with Canadian data.

The reasons we might want published academic work on issues is that it is generally seen to be rigorous, non-partisan, neutral and subject to peer-review. These reasons are valid, at least to a point, but academic journals do not constitute the entirety of relevant, rigorous material.  There are excellent papers on key policy issues written by highly-trained economists working outside of the Canadian academic environment. Resources for the Future in the US, which houses some of the best resource and environmental economists including a couple of Canadians is one example. Canadian institutions such as the C.D. Howe Institute, the IRPP and the Mowat Center fill that role here. As well, work by academics in Canadian institutions may be published outside of traditional peer-reviewed outlets on blogs like Worthwhile Canadian Initiative or in issue papers published by the C.D. Howe or Calgary School of Public Policy for example. These outlets may be both more timely and accessible than peer-reviewed journals.  To say that the share of Canadian (academic) economists’ (peer-reviewed) publications (in academic journals) which focus on Canadian policy issues is in decline is important, but is not a sufficient condition to say that the statement without bracketed fragments holds or that the influence of Canadian economists in general on public policy has declined.

Why is this happening? I think there are two primary causes – data issues and a general lack of economic catastrophe.

Economists are interested in explaining behaviour.  To expand knowledge in empirical work in economics, you need new circumstance, or better data. Offer either, and people will write about it.

When I was in graduate school, many of my colleagues were working with Norwegian data which allowed researchers to track workers’ individual career paths, health outcomes and education among other characteristics and to match these up with data which followed each of the firms at which these workers were employed over time.  These data were unique; you could pick out the productive workers working in non-productive environments and vice versa, which you could not do with other data sets.  These unique data meant that people who would otherwise have no knowledge of or interest in Norway became scholars of the Norwegian labour market.

Unfortunately, in Canada, we too often seem to do the opposite – our data are under lock-and-key, not integrated, and hard to combine.  I have many empirical economists as colleagues, and some are working with Canadian data. Among those who are, many have one-off data which they’ve often worked years to secure through a personal contact, others work on-site at Statistics Canada, having to physically travel to their data, and some are working with data which are technically publicly available but not easily found or compiled.

The second reason for this decline may a general lack of economic catastrophe or interesting economic circumstances in Canada. When I first joined the faculty at HEC Montreal in 2003, it seemed that every person we interviewed for a macroeconomics job was working on the Asian financial crisis. Today, the same people would be working on the Eurozone or the collapse of the US housing market.  By comparison, Canadian economic crises have been, perhaps, less interesting.  I am not suggesting that we create financial crises for the benefit of economists, but we should recognize that in some cases having fewer globally interesting issues to study might be a good thing.  Economics is the dismal science, after all. When you look at the peak interest in Canadian questions in the IRPP report, this interest coincides with interesting questions (fiscal federalism, equalization, etc.) or new circumstances (free trade and subsequently NAFTA).  I wonder how these data would have changed, for example, had we allowed the bank mergers in the late 1990s or had we implemented the economy-wide greenhouse gas policies outlined by Canadian governments past and present.

Finally, while there may be a bias against Canadian (or non-US) papers in the larger and more influential economics journals, it’s not insurmountable as there are certainly many examples of papers using Canadian data published in the top-tier economics journals by Canadian academics.  I do think there is another issue more worthy of note. Given Canada’s small size, journals interested exclusively or predominantly in Canadian policy issues are not going to attract a lot of readership or as many citations as similar journals focusing on US issues.  As a result, Canadian academics end up with limited incentive to publish in these journals as publications generally do not contribute much to merit pay or tenure and promotion cases if the journals in which they appear are poorly ranked.  Out of 322 economics journals ranked on the Journal Citation Reports, the Canadian Journal of Economics ranks 196th by Impact Factor and 83rd by total citations. Canadian Public Policy, in which the original Simpson and Emery piece appears, is not ranked.  This matters because there are many Canadian economists working with data or on issues not directly related to Canada or not suitable for publication in top-tier journals but which are of relevance to Canadian policy.  Translating the results of these studies for a more general Canadian audience has become the role of think tanks or schools of public policy through their own publication outlets because these are faster, more accessible to policy makers and stakeholders, provide the same basic benefits to the authors in terms of merit judgements, and may actually provide a financial incentive to boot.  Again, this may not be a bad thing. Whether it’s in academic journals or other settings, economists know that people respond to incentives. Some of us will write about Canadian public policy because it’s a passion, but others will not without reward.

So, what can we do about it, if anything? First of all, I think we need to assess the broader issue – are policy-makers getting access to timely, rigorous, peer-reviewed and relevant economic research.  If so, then whether that’s in a traditional academic journal or another form is not that important.  If we want to generate more academic research, the answer is data and the positive externalities which making it available will create. Interesting questions help too.  At the University of Alberta, we’re lucky to be right next door to one of the big policy questions of the day in Canada, and my colleagues and I are working on many oil-sands-related projects. But, of course, it’s not just us. Scholars from across the world are interested in working on oil sands issues, and the more data are made available, the more work will be done. If those data allow answers to previously unexplored questions, or the oil sands present issues not yet explored in economic theory, the best work on it will be published in the best journals (fingers crossed on that one).  As they say, don’t let a good crisis go to waste.  In this case, let’s add another line: don’t let good data on it sit idle behind a firewall while it could be fueling useful and relevant research.

2 responses to “The Decline of Canadian (Academic) Economics?”