Browse: Home / Uncategorized / Time Turns off the Taps on Alberta’s Turn Off the Taps Legislation

This is the way the world ends
Not with a bang but a whimper.

Alberta’s “Turn Off the Taps” legislation (see posts from Bankes here and Leach here), more formally known as Preserving Canada’s Economic Prosperity Act, was proclaimed in force by the Kenney government on April 30, 2019 (see comments from Bankes here). This was not without controversy; former Premier Rachel Notley criticized the move as inviting legal challenge, which it did.

British Columbia has contested the validity of the legislation in both the Alberta Courts and the Federal Court. The Court of Queen’s Bench in Alberta ordered a stay in that proceeding on the basis that it would be more practical to have the matter dealt with in the Federal Court (see comment by Bankes here). The Federal Court agreed to assume jurisdiction and as a preliminary matter granted an injunction to British Columbia preventing Alberta from applying the legislation pending a decision on the merits of the constitutional arguments. That decision was overturned last week by the Federal Court of Appeal on the grounds that BC’s application was premature absent regulations and an operational licensing scheme. This was certainly not a decision establishing the constitutionality of the legislation, although it was celebrated as such by the Premier: 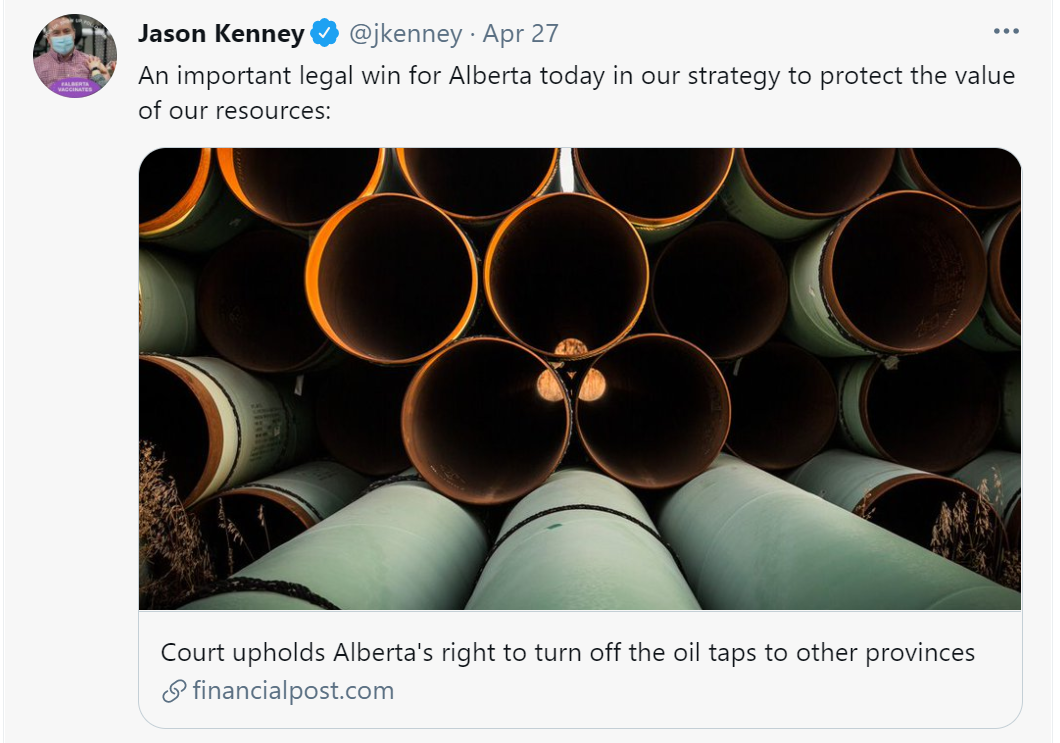 Unbeknownst to some (including possibly the Premier?), the Act contains an automatic sunset clause.

That is, section 14 provides that the “Act is repealed 2 years after the date on which it comes into force” unless, before then, the Legislative Assembly adopts a resolution to extend that date for a period the Legislative Assembly considers to be “in the public interest”. Section 14 was added to Bill 12 during debate in the Committee of the Whole.

It is now May 3, 2021, so you can do the math. It’s been more than two years since the Act was proclaimed. We are not aware of any resolution of extension having been passed. We therefore conclude that the Act has been automatically repealed (it appears that the Alberta Queen’s Printer may agree with us; the legislation is no longer available there). It seems safe to say that, as of today, Alberta no longer has legislation to “turn off the taps to other provinces.”

Did the Act die as part of some grand strategy of reconciliation on the part of the Kenney government? That seems unlikely in light of all of the litigation costs incurred in defending the legislation and Premier Kenney’s defence of it just last week as a tool in their strategy to protect Alberta’s resources. It seems to have died on the vine either because the government didn’t know or forgot about section 14 and the sunset clause.