The Canadian Energy Centre (if you’re wondering who that is, it’s a pro-energy corporation funded by the Alberta government) apparently take their responsibility to tell Canada’s energy story very seriously.

After seeing Bill McKibben’s op-ed in the Globe and Mail on Saturday, I waited anxiously for the response from our vaunted war room.  It finally came.  You can imagine my surprise when, under the heading A Matter of Fact, they put forward what seems to be misinformation.  Given their dedication to true facts, I felt it was important to set the record straight for them, in hopes that their future posts can more effectively raise understanding of the Canadian energy sector.

Perhaps they’ll be willing to publish it as an op-ed. My open letter follows below.

I read with interest your response to Bill McKibben’s op-ed in the Globe and Mail on Saturday. The piece makes some important points, and I’m far from agreeing with McKibben, but I’m also a firm believer that you don’t push back with falsehood, even if you think you’re pushing in the right direction.  As such, this paragraph just didn’t sit right with me.

I’m sure you’ll agree that we must not stoop to the level of our opponents and resort to lies and myths to advance our interests.

While the heading on this paragraph suggests that facts will follow, that’s not what we find.  Words are important, and it seems that perhaps they were not chosen carefully enough.  I’m sure it could not have been intentionally done to mislead, and I expect you’ll want to correct the record.

There are two claims in this paragraph which, when subjected to scrutiny, do not pass muster. 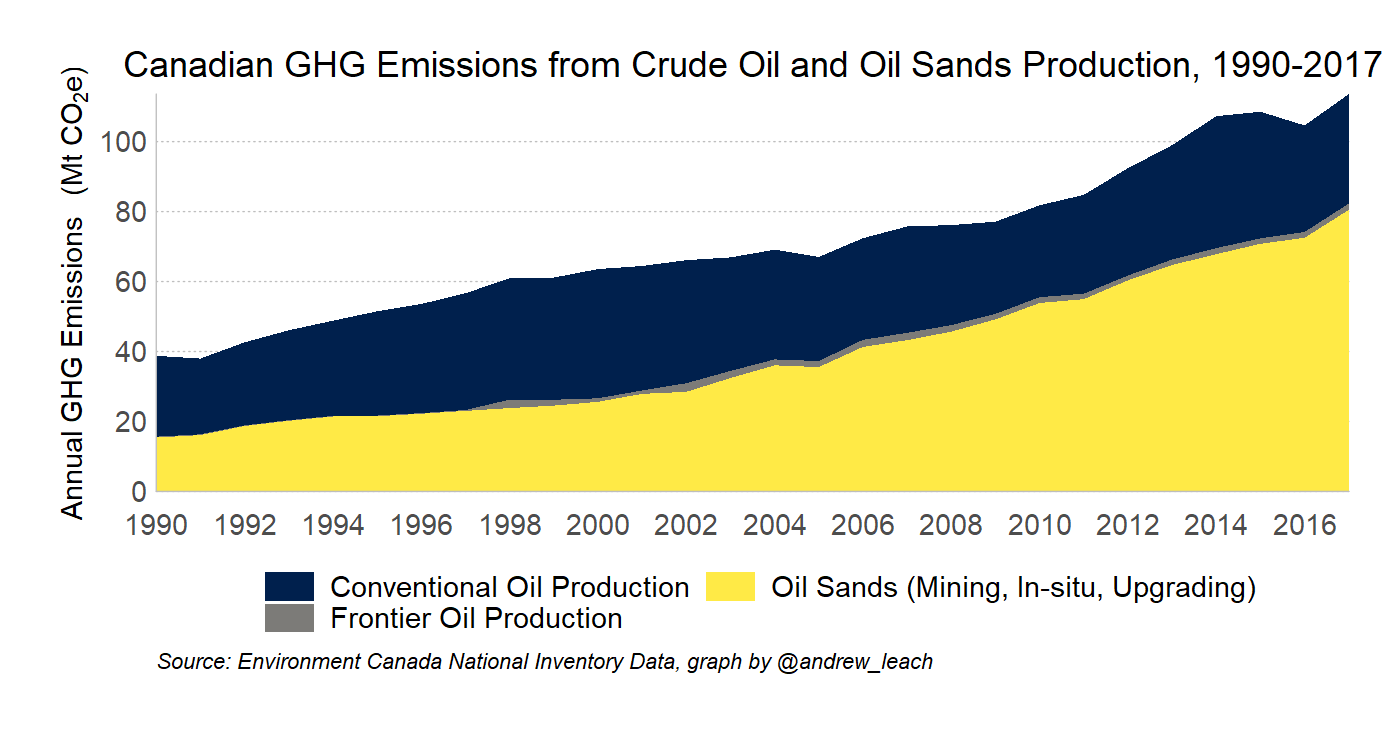 No doubt there has been substantial innovation in the industry, but that has enabled production to grow rapidly over time, which has increased industry’s carbon footprint substantially and steadily since 1990.

Now, before we leave this claim, it will be tempting for many to say that I’m taking false issue and that, clearly, what the Canadian Energy Centre intended to convey was that the emissions intensity of Canadian crude oil had been steadily decreasing.  Sadly, that’s wrong too. I wish I had better news. 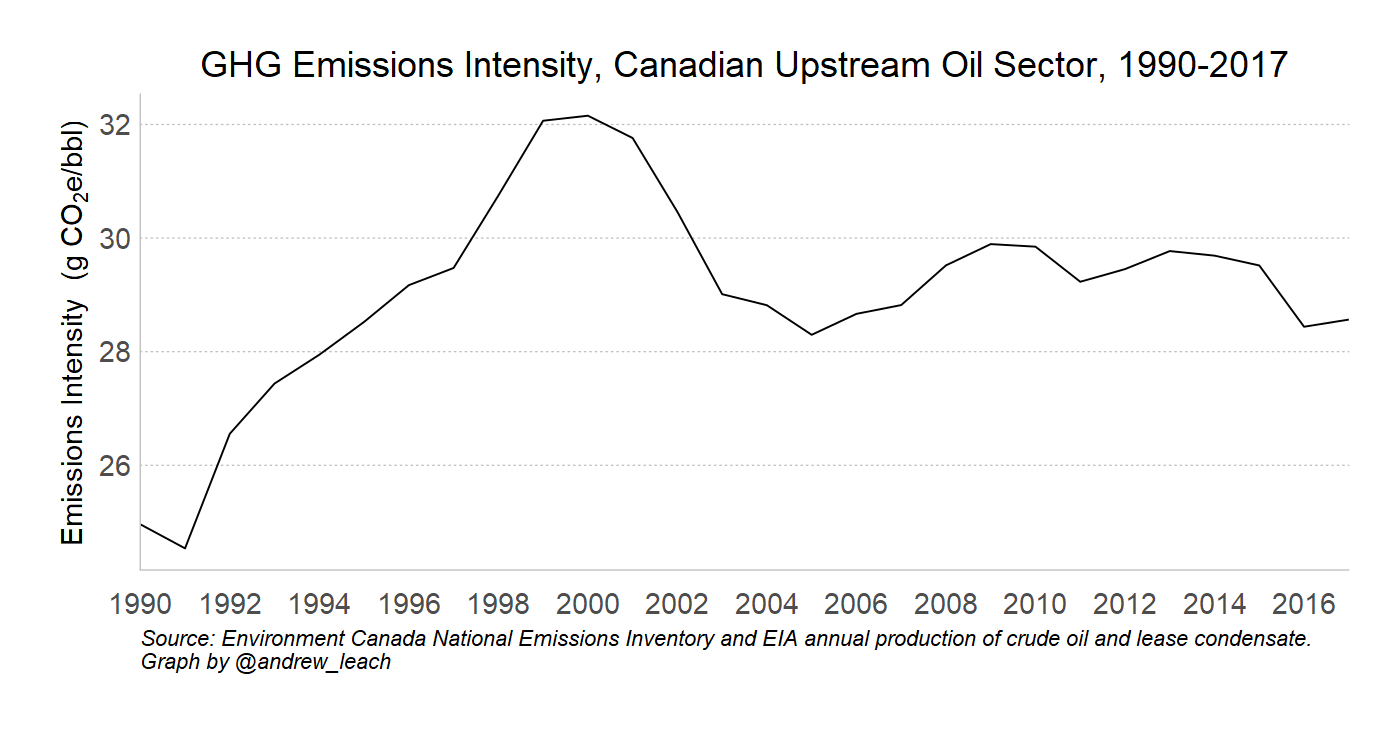 Now, perhaps what you intended to claim in referencing the decreasing carbon footprint of Canadian crude oil was that the emissions intensity of the average oil sands barrel has decreased continuously over time? It has, or at least it had. In the most recent data we have, helpfully shown in the link to NRCan you provided, it had been decreasing but it is increasing. 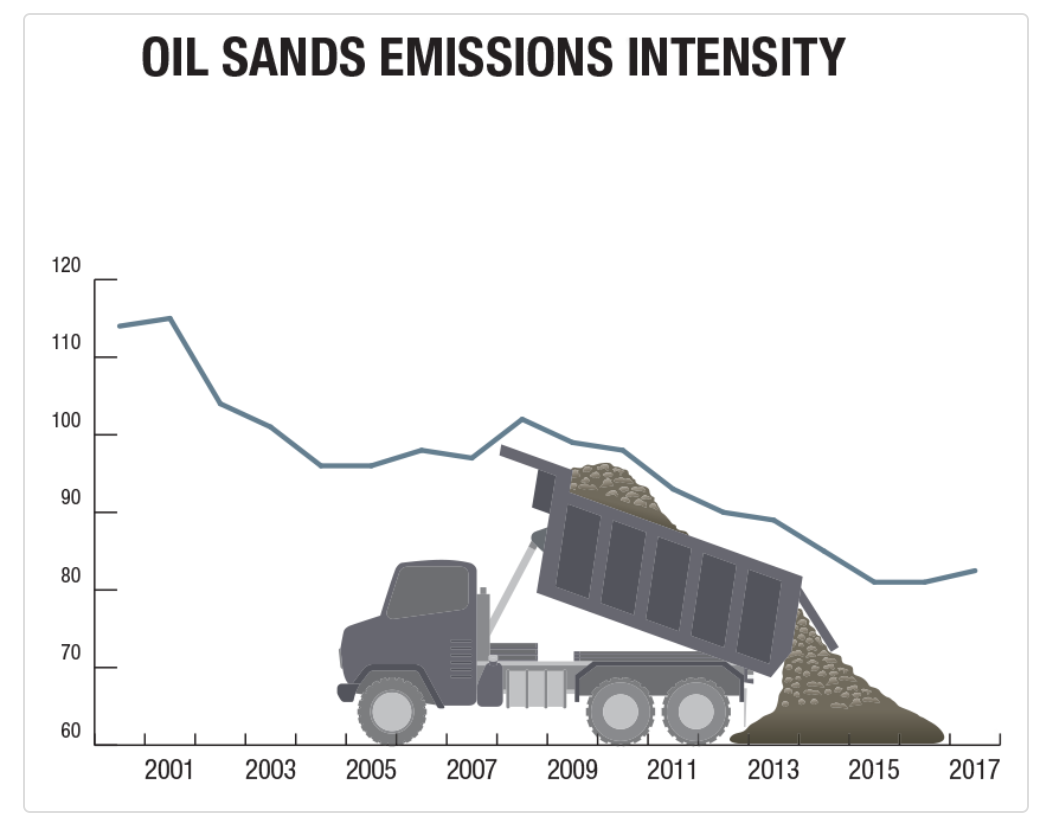 I hope you find this helpful in correcting the record.

Claim #2: Oil produced from many of the newest oil sands facilities have (sic) per-barrel emissions levels that are at or below the average global barrel.

This claim is one that I see a lot: that the most emissions-efficient oil sands sites are producing barrels that are close to or below the emissions-intensity of the global average barrel. While that would be a great result, it’s not something we’ve seen so far, nor is it what is claimed in the link you provided. In that link, Suncor makes a slightly different claim: that the average barrel extracted at Fort Hills is on par with the average crude refined in the United States on a full life cycle basis for which they cite an IHS study from 2014.  That’s a really good report, and worth reading, but they’re comparing to an average barrel refined in the US in 2012, so it might be time to update those figures. (You can download this study, as well as more recent work from the Canadian Oil Sands Dialogue project here. An earlier version of this post had erroneously linked to their 2010 report, which used 2005 data.)

Thankfully, there’s a study for that.  Mohammad Masnadi and several co-authors including the University of Calgary’s Joule Bergerson have looked at the carbon intensity of global crude supply in work recently published in the journal Science (Publishing in Science is kind of a big deal to us academics, by the way). They find that the global volume-weighted-average upstream carbon intensity of crude production is 10.3 grams of CO2 equivalent greenhouse gases per megajoule of energy produced. They don’t assess Fort Hills (we’ll come to that), but they do assess the similar Kearl Project and it comes in at 13.3 grams,  29% above the global average. Christina Lake, one of our top-performing in situ sites gets a similar score. Now, they’re using 2015 data which is not ideal, but I think we can agree it’s better than 2005 data and we can also agree that it’s unlikely that we’re below the global average, unless Fort Hills sits about 30% below Kearl. 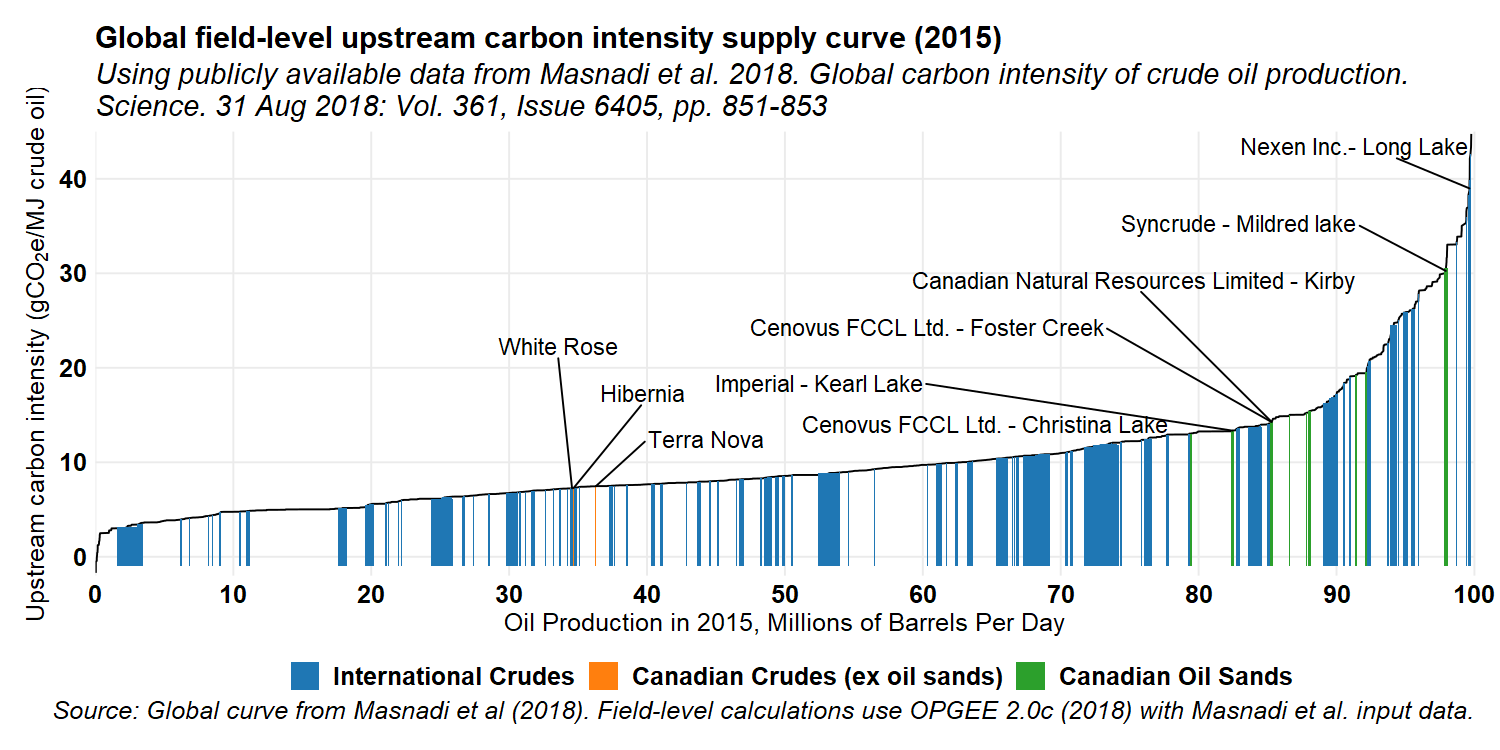 There’s also reason to believe that the claim with respect to US barrels doesn’t hold.  Here’s a quick reason why.  We know that California refines some of the heaviest barrels in the US (the average PADD 5 input has an API gravity of 28.7 while the US average is 33.3), so you’re going to find a larger proportion of thermal heavy oil barrels in that market than anywhere else.  Because they have aLow Carbon Fuel Standard, they study and publish the upstream carbon intensity of any barrels refined in California, along with all their methodology. Just before Christmas, they finalized their 2018 data and it’s now posted here. Fort Hills is there, certified at a relatively low value of 11.78g/MJ while Kearl is 12.89g/MJ (note that Fort Hills is about 9% below Kearl, which is great but not enough to bring it down to the global average cited above).  The 2018 average in California was 12.35 g/MJ, and a WTI barrel is 11.93g/MJ, so our best barrels are a bit better than WTI and a bit better than the average barrel refined in California, although the average Canadian barrel refined in California is well-above their average.

Based on the most recent data available, there is no evidence that “many of the newest oil sands facilities have per-barrel emissions levels that are at or below the average global barrel.”  There is evidence that at least one oil sands facility has per-barrel emissions below the average barrel refined in California, so that’s something. They’re just not the same thing.

Now, before I leave you, one more thing which you might wish to consider. 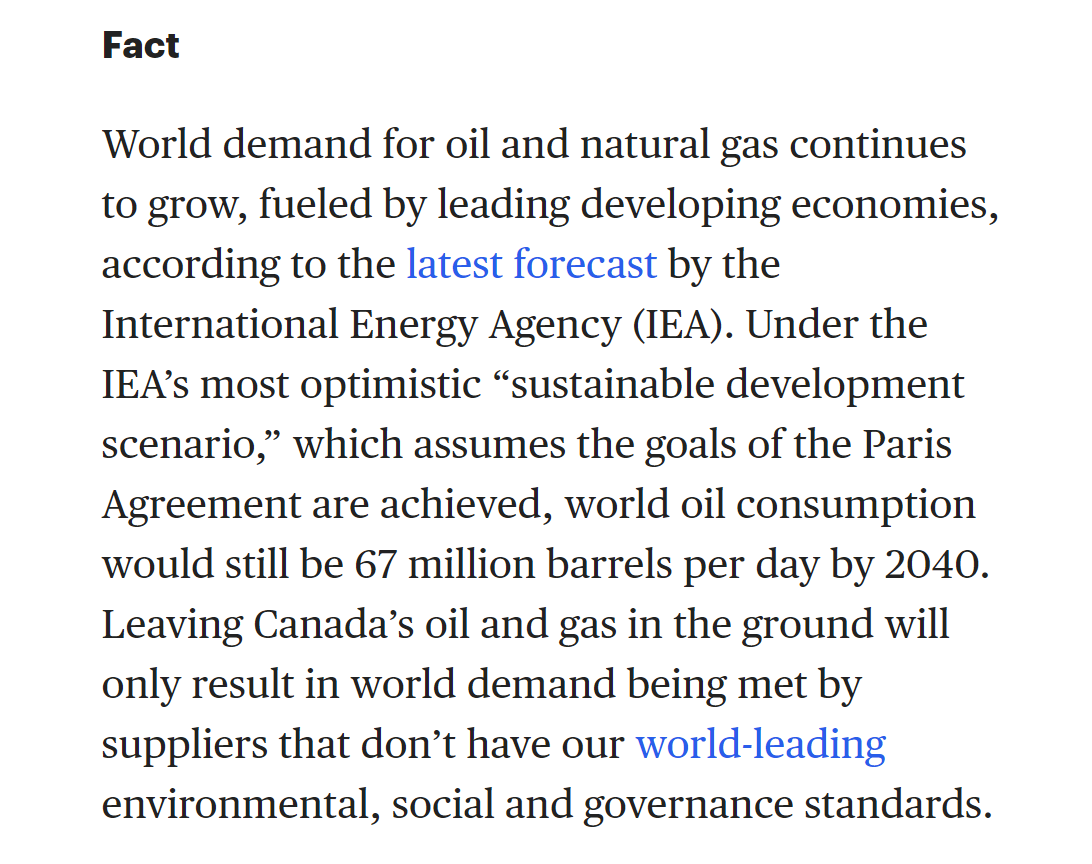 It’s interesting to me when you choose to provide specific numbers and when you don’t.  Now, I am sure you don’t wish to provide a false impression, so may I humbly suggest that many of your readers will not know what current global oil demand is, and so they might find the 67 million barrel per day figure to be a bit out of context. 67 million barrels per day sounds like a lot. It isn’t. It’s a big problem if you’re a supplier of relatively high cost crude oil.

Now, just to be clear, I do note you provided the link to the IEA’s Oil 2019 Report to help, however most of your readers are unlikely to click on it and, by the way, this isn’t the IEA’s latest forecast: a more recent version is in the World Energy Outlook, but they’re not substantially different.

Okay, so on to my key point.  You tell your readers that world demand for oil and gas continues to grow, which is true. It has grown steadily through to our most recent data, but here’s where context is important.  While I’m sure it’s not your intention, readers might read your post to suggest that even in a world acting on climate change, there is robust oil demand and Alberta can carry on as before. But here’s what the World Energy Outlook abstract says about their three forecasts: “In the Stated Policies Scenario, demand growth is robust to 2025, but growth slows to a crawl thereafter and demand reaches 106 mb/d in 2040. In the Sustainable Development Scenario, the unprecedented scale, scope and speed of changes in the energy landscape paints a very different picture: demand soon peaks and drops to under 67 mb/d in 2040.”

Importantly for the prospects for Alberta’s oil sands, while the IEA projects that prices will increase at rates above inflation to sustain demand in the scenarios where the world fails to act on climate change, they project flat real dollar prices in the Sustainable Development scenario you cite.  I do worry that, perhaps, you’re inadvertently suggesting that action on climate change will not have material impacts on the world oil market, which no credible entity is suggesting. I offer this only as a helpful suggestion.

I do hope you find these suggestions helpful and I wish you well in your mission.