Today, a post has been making the rounds which claims that the Keystone XL pipeline would raise gas prices in the US Midwest by, “20 to 40 cents per gallon, based on the $20 to $30 per barrel discount on Canadian crude oil that Keystone XL developers seek to erase.”  Further, the report claims that, “such an increase, just in the Midwest, could cost the U.S. economy $3 billion to $4 billion a year.” Both of these claims deserve to be challenged, since they are not supported by any evidence.

Before I take on these two claims in turn, it’s worth noting that claims about the effect of Keystone XL on gas prices have been floated by proponents of the pipeline as well, such as this piece from TransCanada which states that, “Keystone XL will increase supply to the broader US market – namely the US Gulf Coast. For a given level of demand, higher supply would lower prices for crude oil, which is the most important factor shaping gasoline prices.”  What follows applies to those claims as well.

First, let’s be clear – the cost of crude is by far the largest cost for a refinery, and there is no question that Keystone XL will affect crude oil prices in the US, leading to more expensive crude in the mid-continent than would otherwise be the case.  Since the Gulf Coast market is a coastal market, an increase in supply arriving by pipeline will displace crude which would otherwise enter by tanker, so there’s no reason to expect that Keystone XL would reduce the marginal cost of crude in the Gulf Coast. If, on balance, crude remains cheaper in Alberta, it is possible that some refiners will be able to access crude more cheaply than they otherwise could if they have access to firm shipping space on the pipeline, but this will likely be imperceptible in the data. On a broader scale, the shift in sources of oil supply in North America is likely to shift pricing relationships such that mid-continent crudes remain discounted slightly to coastal crudes for the long term, as marginal barrels flow outward.

So, do lower regional crude costs translate to lower regional gasoline prices? No. In fact, we have had a nice test of this over the last 2+ years as crude costs in the mid-continent have been discounted significantly relative to coastal crudes. As the figure below shows, between January 2004 and mid-2011, Gulf Coast refiners had crude costs slightly lower than their midwestern counterparts, as the marginal barrel was moving in-land from the coast.  In mid-2011, everything changed and the mid-continent crude glut led to significantly lower average crude costs for refiners in the midwest. 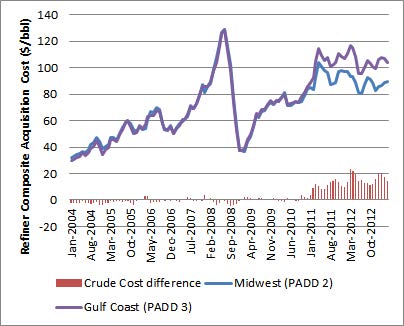 Given the logic of the Consumer Watchdog report, you would certainly expect that this major transition in relative crude prices would have had an impact on gasoline prices, at least leading to small decreases in the Midwest, right? Well, no. In fact, as shown on the graph below, over the period from January 2011 to today, midwest retail gasoline prices have been, on average, 4% higher than their Gulf Coast equivalents, while crude costs to refiners were $13.82/bbl lower. In the two years previous, crude costs were less than 1% different on average, and gasoline costs were 3% higher in the Midwest. A massive crude cost discount had virtually no impact on gasoline prices. 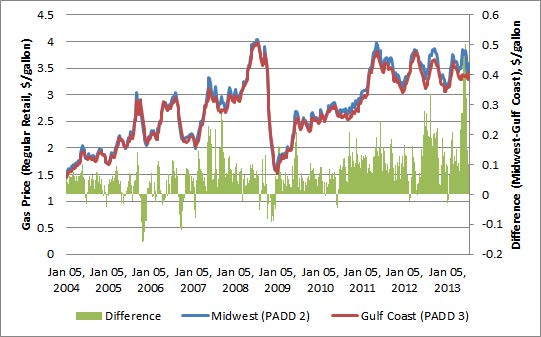 You can guess where this is going.  Since the refined product market in the US is not as clearly differentiated by infrastructure as the crude market, the changes in crude costs to midwestern refiners changed their relative position among US refiners, but did not impact the costs of the marginal barrel of refined product.  As such, midwestern refiners were able to realize large increases in margins, as shown in the figure below, while consumers were still paying gasoline prices based on the higher cost production in other areas and export market prices. 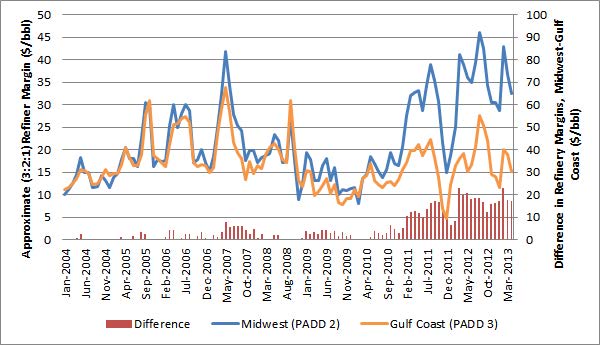 So, what should we expect to happen to gas prices if Keystone XL goes through?  Not much. You would expect to see an increase in crude costs and a decrease in margins for midwestern refiners, and perhaps a slight increase in margins for Gulf Coast refiners. Midwestern refiners will not be able to pass on these costs to consumers because they are already charging market prices for refined product and reaping the benefits of lower cost crude. If they tried to maintain the margins they’ve enjoyed for the past couple of years, they would be priced out of the market. There will be a transfer of wealth, but the transfer will not be from US consumers to oil producers, but rather from US mid-continent refiners to US and Canadian producers, and perhaps a few Gulf Coast refiners as well.

The debate around KXL and gas prices has largely been of the fact-free variety. Let’s focus on the evidence from now on, shall we?

One response to “On Keystone XL and gas prices”