I just tuned-in to a fascinating Twitter conversation between Fort McMurray Mayor Melissa Blake and Alheli Picazo.  Ms. Picazo’s question was as follows;

I was wondering if you had given your permission for your likeness (to be) used for the “ethical oil” PR campaign. Especially since your image appears next to a woman about to be murdered who clearly didn’t give her consent.

If you have not seen it, Mayor Blake is featured prominently in one of the posters recently released by Ethical Oil, shown below. 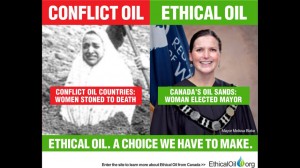 Ethical oil ad campaign, via the Globe and Mail

Mayor Blake’s responses (1 and 2) were surprising, at least to me (perhaps she has been on the record on this issue before):

I was never even asked!!! I’m not at all pleased about it.  I cringe when I see it, no need to send again 🙁

How do you feel, in general, about the ‘ethical oil” meme? It’s one thing to be for the oil sands, it’s quite another to create this (in my opinion) false-argument.

I’m very pro oilsands+pro environment and anti exageration on either side. We need to deal in FACTS and real-life pros and cons.

This conversation brings to the forefront another set of issues related to my post last night: how do the groups and people portrayed in the Ethical Oil ad campaign feel about it? I read a blog post earlier this week which may or may not be representative of reaction in the GLBT community with respect to this poster, and now this reaction from Mayor Blake of Fort McMurray, a staunch defender of the oilsands.